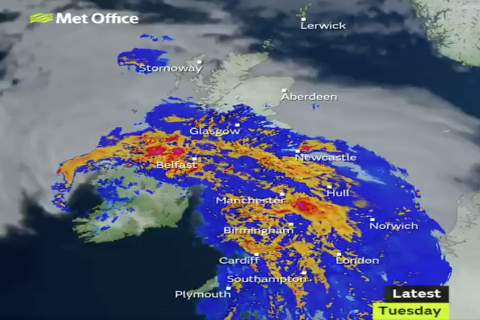 The British Isles is facing another ferocious Atlantic storm, just two weeks after torrential rains caused major disruption, flooding and damage to the rail network. Infrastructure managers, principally the UK’s Network Rail agency, are gearing up, while still caught up in repair works from the last storm.

Infrastructure managers are facing another prolonged spell of severe weather, as another storm front breaks across the British Isles, bringing heavy rains and high winds to everywhere from the Shetland Isles to the Scilly Isles. Front line locations, including the sea wall at Dawlish in South West England, and the West Coast Main Line are expected to be hard hit again, just two weeks after a similar weather system knocked out dozens of locations in Ireland and the United Kingdom.

There is already a catalogue of repair work underway, after the overnight storm on 11-12 August hammered the British Isles. Most tragically, damage caused by that storm caused landslips around Stonehaven in the North East of Scotland, which directly resulted in the fatal derailment of a passenger train. The line between there and the city of Aberdeen remains out of action, cutting off Britain’s oil capital from southbound passenger and freight services.

The most severe infrastructure damage was also in Scotland, where a combination of circumstances wiped out a connection between Glasgow and Edinburgh. Extreme rainfall contributed to the collapse of a canal near the town of Polmont, which in turn washed away several hundred metres of adjacent railway line, halting passenger services for up to two months, and hampering access to regional freight terminals, including Grangemouth Docks. There were many other localised instances of flood damage and obstructions on lines – mainly tree branches blown onto tracks and damage to overhead line equipment – which left response staff busy trying to keep the network open.

Freight resilience to the fore

Freight operators reported relatively little disruption to operations. The North of Scotland remains worst affected, with alternative routes from Aberdeen all affected at some point during the aftermath of the storm.

The relatively small number of freight operations means that disruption to services do not as readily make the headlines. Freight does generally have more resilience, with better ability than passenger service to reroute. For example, earlier this year, track damage around Scunthorpe defeated passenger operations, but freight rerouted and continued operations, albeit by abnormal diversions.

Standing by for rapid response

Engineers are already on alert for any issues arising from the expected daytime deluge on Tuesday. While experienced in dealing with severe weather, the engineering teams are nonetheless taken aback by the unseasonal weather. Britain does experience summer storms, but the severity of recent weather systems are more usually associated with winter seasons. Earlier this year, severe weather caused flooding in the North of England, notably around the Drax power station complex.

This time, the combination of rain and high winds are expected to be the biggest hurdles to overcome. Exposed sections of the West and East Coast Main Lines are under close scrutiny, as are the lines running through heavily wooded areas of South East England.

The headache for engineers this week is the possibility of disruption to the extensive planned programme of maintenance, renewals and improvements planned for the public holiday weekend in a few days’ time. Significant works are planned for both the East and West Coast Main Lines.

Works on the ECML are centred around Kings Cross passenger station in London, which is of most importance to passenger operations – there will be no services from the station this weekend. On the WCML, Europe’s busiest mixed-use route, there will be significant track replacement work in the Coventry area, just south of Birmingham, with all passenger services suspended between there and London. The most radical engineering challenge is the move of signalling control to the state-of-the-art Manchester Rail Operating Centre, necessitating extensive diversions in the North West, particularly around the port of Liverpool.

It being the traditional August Bank Holiday, when the British traditionally head for the seaside resorts, engineers are bracing for the traditional Bank Holiday weather. More rain. Mercifully, the long range forecast predicts a dry weekend. Main image shared by UK Met Office on social media.