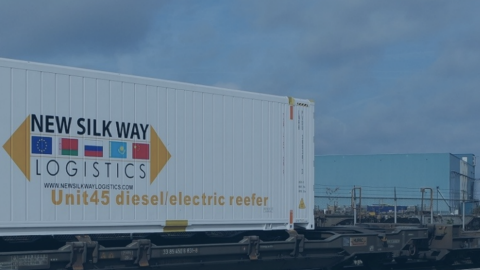 Fresh products on the way to Russia by train, finally

The first container of fresh salmon from the Netherlands is on his way by train to Russia, and ultimately China. This is a breakthrough, as it is the first test shipment of a product that was previously sanctioned to travel through Russian territory. If all goes well, a fresh product line to China via Russia will commence in April.

New Silk Way Logistics, a Dutch logistics service provider told RailFreight.com that it loaded the container last Friday in the Netherlands. The train, operated by DBO Bahnopertor, departed on Saturday morning, with its final destination Xi’an. Here, it will be trucked to Shanghai at the east coast of China. At the moment of writing, the container was at the border between Poland and Belarus, only a country away from where the novelty is about to happen.

“On the border with Russia, the electronic seal will be attached to the container”, says Hanno Reeser, who works for the Company H.Essers , who is a shareholder of New Silk Way Logistics. “This is currently done by the Russian government, which is also involved in the test. But ultimately, the railway operator on that stretch is responsible for the application of the seal”, he explains.

In July 2019 the Russian government announced that it would lift the ban on overland transport of previously sanctioned goods such as fresh foods and agriculture products. However, it must be guaranteed that the container is not opened on Russian territory. The electronic seal gathers real-time data, and when it is taken off at the border with Kazakhstan, it provides proof of the shipment being in transit.

The company responsible for the supply of the electronic seal is a Russian, commercial company. This was decided earlier this year, when the Russian government began tendering for the job. Earlier, the Russian government said that the supply would be up to the market, as it was then in the hands of state-owned multifunctional technology corporation Rostec. Both of this has been revised.

The seal is however not the only additional work that is done, Reeser can tell. “The shipment requires additional paperwork, informing about the type of the product, the end destination and the purpose. This filing is subject to a learning curve. We had to learn what to prepare for this first shipment. But once we have done this several times, we will know how to operate this new service”, he says with optimism.

The market has waited long for the realisation of the transit shipment, as there was a period of uncertainty after the first announcement last summer. Also from the Russian side, there was a long period of documentation preparation.

The lift of the ban on transit traffic from EU countries will be an opportunity both for European shippers as well as for Russia. The latter will be able to increase the freight volumes transported via its territory. The existing alternative routes are very complicated, therefore the main benefits will be for Russia as a transit country.

Moreover, there is currently great demand of certain food products in China, especially as freight flows have been disturbed due to the coronavirus outbreak. “There are things that China really needs at the moment”, said Kuznetsova. In general, China lacks meat products as beef and pork, as well as fish, wine and beers, dairy, or other food products. Flowers from the Netherlands are another popular import product, all of which were banned for transit through Russia.

The current test of New Silk Way Logistics is shipping salmon from the Netherlands, but there are many other services lined up for this type of transport. In Norway, a salmon train had been ready for departure since the announcement. It would move salmon from the port of Narvik to Xi’an in China, where demand is currently met by air transport. Approximately 30,000 tonnes of salmon are shipped from Helsinki to China per year.

“We have been eager to develop this service, but then we had a long time of waiting for it to actually happen. We have however taken preparations to kickstart this train. We are currently waiting for a permit from China to access the country with this product”, explains Micael Blomster, who is heavily involved with the project.

The products that have been banned from transiting through Russia are the following: