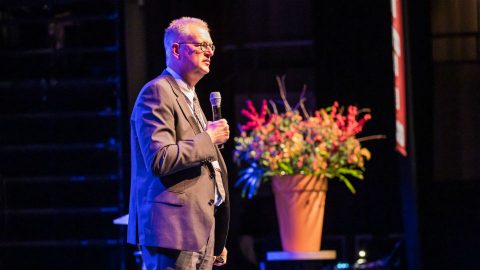 The regular rail freight service from the Dutch hub of Venlo to Xi’an in China will commence on 20 June 2020. This was announced by Peter Pardoel of Cabooter Group during the European Silk Road Summit, held in Venlo on 26 and 27 November. Twice a week the intermodal connection via Baku will connect the two hubs on other ends of the world.

Cabooter Group is the operator of the terminal in Venlo, where the cargo from China will be received. The containers will be send back to the Asian country as well, but not after they have been filled with goods from other parts of Europe. After four years of hard work, the company is now almost ready to launch the bi-weekly service, which should eventually be turned into a daily connection.

Cabooter Group has teamed up with the port of Baku, from where the freight is shipped over the Caspian Sea and ÖBB’s Rail Cargo Group, which will be operating the train across its Eurasian network. A Memorandum of Understanding to seal this deal was signed in Vienna on 26 November. A day later all three parties were represented at the summit in Venlo, to elaborate on the new cooperation.

The route starts at Xi’an in the east of China, where it heads to Kazakhstan. In the port of Aktau, the containers are moved onto a vessel, to be shipped across the Caspian Sea to the Azerbaijani port of Baku. Here, the cargo is loaded onto a train once again and enters the Baku-Tblisi-Kars railway, to reach Turkey. In Turkey the journey continues to Europe via Istanbul, Prague and eventually Venlo, Pardoel explains.

Why this route? The Middle Corridor is, in comparison with the conventional route via Russia, Belarus and Poland, not the least complex. But the Dutch company says it wants to operate independently, not having to deal with Russian influence on route. The regular journey of the New Silk Road draws for a large part through Russian territory, and many consider the journey as being subject to political risks.

Moreover, there are other advantages of the route via the Central and Eastern European (CEE) region. This region breaths potential; there are emerging markets and a lot of projects in the pipeline to better connect CEE countries to China by rail. Pardoel anticipates that the train from Venlo will soon pick up cargo on the way from hubs like Vienna, Budapest, Prague and Istanbul.

The pickup of eastbound cargo is essential in the supply chain between the centres, as currently the tip of balance is towards the west. There is plenty demand for Chinese products in Venlo and its hinterland, but these trains will not be filled with cargo originating from this region alone.

In order to solve this, Cabooter Group is relying on its wider network and partners. It plans to collect cargo from as far as Portugal and Scandanavian countries; wine from the south of Europe and salmon from the north. For example, a direct rail freight service between Venlo in the Netherlands and Sweden was launched on 2 September this year, partly tapping into the soon to be operated connection to China.

In China, the journey should not only end in Xi’an. This may be the first destination on the map of Cabooter, but it plans to extend the service to Wuhan and Zhenzhou in the near future.

In China, it has partnered up with the China Investment Promotion Agency (CIPA), in cooperation with public development company LIOF of the Dutch province of Limburg. CIPA will promote the region of Venlo in China as the place for Chinese companies to serve the European market. And vice versa, to collect and ship goods destined for the Chinese market from this region. The cooperation is also open to other parties that have an interest in a stronger trade relationship between Limburg and China.

In Baku, the Venlo firm also has a stake, in the new terminal that is currently under construction to handle the expected volumes of freight through the port. This new terminal is to become bigger, more advanced and more attractive. The port of Baku recently signed an agreement with DP World to set up a Free Trade Zone at the port. This too will provide a wide range of value added services for companies in the region.

Meanwhile, Cabooter Group is gearing up in its hometown. It is currently developing the largest inland rail terminal in the Netherlands with around 280.000 square meters and 900 meters track length. When asked why Venlo, it is mostly this merritt pointed out. Cabooter currently operates two terminals (of which one just across the border in Germany) and this addition will enable it to handle huge volumes. According to Pardoel, this gives Venlo an advantage over neary hubs as Tilburg and Duisburg. If you ask anyone in the province of Limburg, Venlo will soon be the main Silk Road hub in western Europe.