DB to invest record amount in new trains and locomotives

Deutsche Bahn (DB) has earmarked a record sum of more than 19 billion euros for investment in new trains and locomotives in the current decade. According to DB, it marks the largest fleet modernisation programme in the company’s history.

“With the record sum of more than 19 billion euros, we are building the capacity for even higher demand. Modern vehicles not only make the railways more climate-friendly but also more reliable and customer-friendly”, DB CEO Richard Lutz said at the InnoTrans 2022 in Berlin.

The freight train of the future

The fleet modernisation will concern both passenger and cargo rolling stock. Regarding freight, DB highlighted that, during InnoTrans, it will present the freight train of the future. With that, the German company means the new so-called Cargo Dual-Power locomotive, which – when running on non-electrified lines – can switch to biofuel operation. The Cargo-Zweikraft-Lok, as the Germans call it, can be utilised on long distances or for shunting.

On top of that, DB will also showcase some other milestones that will contribute to building the future train, such as the digital automatic coupling technology, considered the backbone of the freight train, but also the m2 modular wagon, jointly developed by DB and VTG, that can be adapted for different types of goods.

From 2023 onwards, DB will add three new ICE trains every month, for an expected total of 450 trains by 2030. One of the new additions will be the low-floor ICE-L, which was presented last week. DB will begin adding the first of 23 train sets to the fleet in the autumn of 2024.

ICE trains moved 59,1 million passengers in the first six months, an increase of 117 per cent over last year. DB Regio recorded a 60-per cent jump in passenger numbers to around 725 million. Ongoing construction and maintenance work, however, is struggling to keep up, with a drop in punctuality as a result. DB’s long-distance ICE trains were particularly affected, as only 69,6 per cent of trains were on time in the first half of this year. In the same period last year, that figure stood at 79,5 per cent.

The article originally appeared on our sister publication RailTech.com. 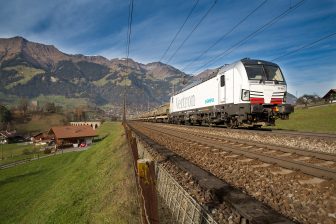 Regrettably, the “state off the art” infrastructure, since long is due for a decisive upgrading, as now Root of Industrie’s short comings.
For utilisation of existing, capacity substantially has to be added!
Electrification, yes, but a timely, etc.!
“Squats” and cracks, at mere head of rail…, rail breaks, are symptoms, now attended by “maintenance”, predictive and “optimal”…
Low price standards, now mean high risk, low quality and high costs – as ware owners have shifted strategy to “JIT”!