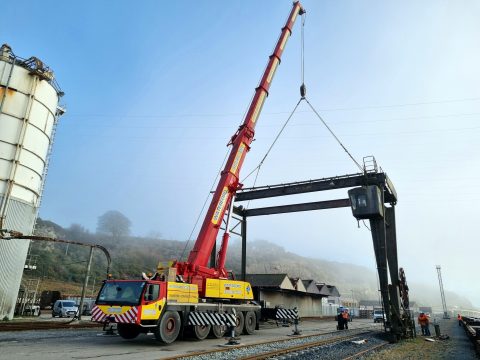 Towering over the Irish port of Waterford for the best part of half a century, the gantry container crane has been as much a part of the skyline as Trinity Cathedral on Barronstrand Street. Now the last rites have been spoken for the industrial giant, almost as famous as the great twin shipbuilding cranes in Belfast harbour. Outdated and out of use, the gantry was dismantled over Christmas in time for a new start at the new year for Waterford’s rail terminal.

The Sallypark freight terminal at Waterford has seen busier times. However, the sidings, running directly off the north end of the port’s passenger station, have seen a recent revival and some modernisation. The most visible aspect of that has been the dismantling of the port’s gantry crane, which no longer required moving intermodal containers. That job is now more flexibly handled by modern reach stackers. The job of removing the gantry was handled by local firm Waterford Crane Hire.

Irish rail freight has, for many years, been in the doldrums. In Northern Ireland, the UK administered part of the island, rail freight traffic has disappeared completely. The last facility, Belfast Adelaide intermodal terminal, was converted into a maintenance depot in 2012.

However, in the Republic of Ireland, there has been some recent resurgence. New timber, bulk and intermodal flows have all been in evidence in the past twelve months, and a plan has been published by the government in Dublin, with some collaboration from the UK authorities in Belfast. Ballina in the north has become something of a freight centre, and one new flow sends and receives intermodal traffic from Waterford. To help facilitate that new traffic, the old gantry crane was removed at the end of last year.

Heavy lifting cranes were brought in to carry out the complicated task. “One of the final jobs of 2022, dismantling an old Liebherr gantry crane at the Iarnród Éireann [the nationalised Irish railways combined traffic operator] depot in Waterford City”, said a post from Waterford Crane Hire. “Our Liebherr LTM 1130 and LTM 1040 used on day one with the LTM 1060 being used on day two”, they explained.

The Sallypark freight yard is served by freight traffic connections with Dublin and Ballina. IN 2021, a new Ballina to Waterford intermodal service, operated by Iarnród Éireann and XPO Logistics came on stream, in addition to the wood pulp and timber services from Ballina and Westport. A moribund line exists, with potential to reinstate mixed traffic to Rosslaire – another south of Ireland port. Both the terminals have benefitted from maritime traffic using the ports to avoid the UK, and the costs and administrative problems brought about since Brexit.