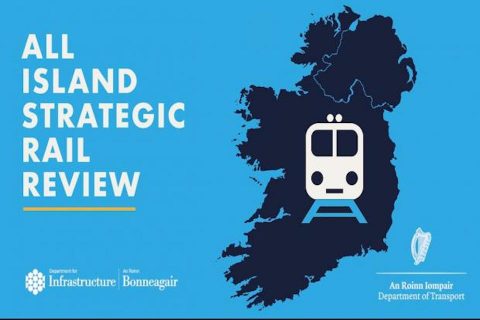 Increased use of rail freight is a desired outcome for a new study of railway utilisation in Ireland. A joint initiative has been proposed by the devolved UK government in Belfast, and the Irish Republic’s government in Dublin. Co-operation between the two administrations could see freight traffic grow in the south; and return to the rails in the north for the first time in several decades. The study comes in response to economic and environmental factors, which would benefit business and promote the low-carbon agendas of both UK and Irish parliaments.

The Infrastructure Minister for the UK territory of Northern Ireland, Nichola Mallon, and her counterpart in Dublin, the Republic of Ireland’s Minister for Transport, Eamon Ryan, have announced a joint study into an all-island strategic rail review. Of note is the specific ambition to increase rail freight activity across Ireland, which would mean mixed traffic in the north for the first time in several decades. Other ambitions include higher frequency passenger services and reinstated lines in more rural parts of the island, particularly the west coast.

The All Island Strategic Rail Review will consider the feasibility of high-higher speeds on the network and whether there is a potential to increase use of the network for freight, such as discussed last month. “Rail is an issue I am very passionate about”, said Nichola Mallon. “I believe it has massive untapped potential to deliver multiple benefits across our island. It is my priority to address regional imbalance, tackle the climate crisis and better connect communities across Ireland.”

The Review represents a level of commitment and co-operation between the two governments at a time of high tension and unrest in Ireland, particularly in Northern Ireland. The trade deal made with the EU has made trading with Northern Ireland more difficult for both Irish businesses and for the rest of the UK. Feelings and so strong that there has even been rioting in Belfast, opening up long-standing divisions in the community.

This new study will consider how the rail network on the island of Ireland can improve sustainable connectivity between major cities, such as Belfast and Dublin, and Derry/Londonderry and Galway. The authors of the study say it will enhance regional accessibility, such as the recently discussed Western Corridor, and to destinations in the North West – a contentious issue since that region is divided between the two jurisdictions.

“I’m a firm believer in the potential of rail in supporting social and economic development and the environmental sustainability of our transport system”, said Eamon Ryan. The Irish Minister for Transport also pointed to the European Year of Rail as an ideal opportunity to promote economic development the back of rail infrastructure. “I’m particularly pleased that we’ll undertake this review on an all-island basis, working with our colleagues in the Northern Ireland Executive. The review will look at how rail can help better connect cities and regions across the island and will complement the investment we already plan.”

Ireland’s railway network remains quite extensive, with over 2,700 route kilometres (1,700 miles) in operation. This represents only around a third of the installed capacity. Cross-border traffic is restricted to one coastal route linking Dublin and Belfast via Drogheda. The unique ‘Irish Gauge’ of 1600mm has historically ruled out interoperability with the island of Great Britain – although ambitious proposals have been made for a fixed link between Scotland and Northern Ireland as part of the UK’s Union Connectivity Review.

While there are notable freight flows in the Republic of Ireland, and calls for enhanced facilities, there is only passenger traffic in the north. Northern Ireland’s last significant rail freight terminal, Adelaide in the south of Belfast, has long since closed and been redeveloped. Part of the site remains as a maintenance depot.

In the past, economic growth and stability has helped to reduce tensions, and given communities loyal to either London or Dublin a more peaceful direction for their energies. It is unlikely that rail freight can solve all of Ireland’s issues, but the symbolic co-operation between Belfast and Dublin is not to be underestimated.