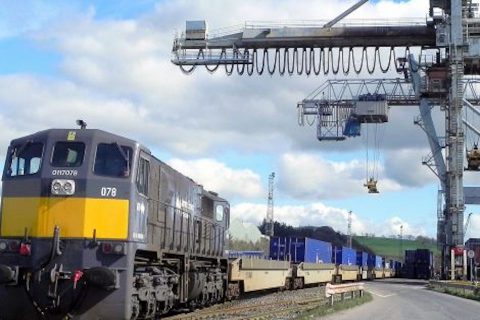 Multi-national logistics operator XPO, in collaboration with the Irish national operator, has announced a second weekly intermodal service between Ballina and the Port of Waterford. The service will start in June, less than a year after the inaugural service. The line to Waterford’s Belview freight terminal has been in jeopardy in recent years, but the boost in continental trade, much of it attributed to traders seeking to avoid Brexit complications, has seen a turnaround in fortunes for the south coast port.

A new intermodal service is generally greeted as important news in the small Irish rail freight market. That is certainly the case with the soon to be inaugurated service from Belview, the rail freight port on the River Sur, serving Waterford, the county town in the southern province of Munster. Irish trade press sources say that after a patchy start, the service has seen consistency improving loads to such an extent that the new service will double capacity.

Although threatened with closure over the years, Belview has been resurgent of late. The four-track terminal now handles intermodal and bulk cargos to and from European shipping and Irish road hauliers. The port has benefitted from some degree of security due to being named in the national Rail Freight Strategy 2040, which places Belview at the heart of an expanded Irish rail freight operation.

Iarnród Éireann / Irish Rail (IR), which tends to play its cards close to its chest regarding its freight operations, has been thus far silent on the new business. However, IR says it recognises the sustainable benefits that rail provides. The national operator says it collaborates with all stakeholders to contribute to achieving Ireland’s climate objectives and wider strategic national outcomes.

Additional intermodal rail traffic will be welcomed at the port, not least for helping clear its container storage and reducing heavy road traffic around Waterford. Although among the larger towns in Ireland, it is nonetheless a modest-sized settlement of fewer than 100,000 inhabitants. The direct service between Waterford and Ireland’s northwest intermodal terminal in Ballina suggests traders are taking advantage of the route to avoid the formerly popular ‘land bridge’ across Great Britain – a route that now incurs significant customs administration as a result of Brexit.

Port authorities acknowledged that there is additional capacity at Belview for more rail services. They would like to see a connection established with Dublin – 100 miles (160 km) to the north – but with two motorway routes built during the boom years of the 1990s Celtic Tiger economy that may not be on the horizon anytime soon. Long term, given that much traffic heading for Ballina, is destined for the UK territory of Northern Ireland, perhaps a direct link to Belfast may be possible – kick-starting rail freight in the British enclave. For now, though, most parties are content to prepare for the Ballina service in June.

Interesting case, indeed. Quality matters and in that respect short distances should be an advantage, as risks correspondingly should be small. Domestic lines as well prove low risk, etc., etc.
(Short comings with rail cargo transports has been related fact, that when hit by disturbing, consequences are spread, “as rings on water”, thus in particular across big nets… A familiar rail way thesis has been, that “short lines” are good business…)