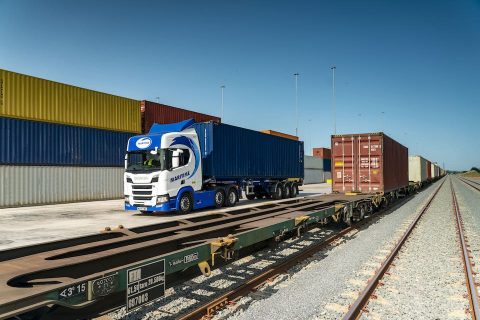 Published on 06-01-2023 at 10:47
improve road now to support rail later, and lead the way for the rest of the UK says Transport for the North report Image by East Midlands Gateway press report

Freight by road accounts for ninety per cent of all tonnage moved in the North of England, say findings from Transport for the North, the sub-national body responsible for supporting the region’s economic development through transport infrastructure enhancement. TfN finds that by supporting short-term gains for road traffic, rail freight will benefit in the long term.

In a new report, Transport for the North says that the overwhelming predominance of road freight will linger for more than a decade, but the long-term future for the region’s economy is rail-based. The figures are skewed in favour of road by including first and last-mile deliveries by road. Continuing to improve the network and decarbonise the road haulage fleet is vital in the short to medium term, recognising that the electrification of the rail network will take until 2040 at the earliest – something that the rail infrastructure agencies and the supply chain would be keen to prove wrong if given the chance.

The long-term rail strategy for the North of England observes desirable minimum standards for freight, which set out how to enhance the delivery of improvement to the North’s rail network to accommodate the evolving needs of the freight market. The report recognises the importance of major enhancements like the Transpennine Route Upgrade and localised improvements to support longer and heavier trains, increased path availability, and additional gauge clearance.

The report emphasises improved connectivity at maritime centres, where large volumes of road traffic are already generated. Further significant modal shift to rail is required, observes TfN. “The five major ports in the North (Hull, the Humber Ports, Liverpool, Teesport, and Tyne) to be served by rail with gauge clearance allowing the latest generation of intermodal containers to be carried on standard wagons, enabling trains to operate unrestricted at the highest speed appropriate for the load”, notes the TfN Freight and Logistics Strategy.

“Our statutory role and responsibilities remain unchanged and require us to consider the transport system in the round, focusing on issues and investment proposals that go beyond local authority boundaries”, says Martin Tugwell, the TfN Chief Executive. He recognises that the principal inland freight movers will continue to be road and rail without overlooking the extensive waterways of the region, which at one time were the dominant freight prime movers. “A collaborative approach enables solutions to be developed and implemented in a timely and cost-effective manner”, he notes.

TfN says it can lead the way and influence and shape the processes and programmes that operate at a national level. “We need to ensure we maintain an efficient multimodal freight network by improving connectivity gaps,” says Tugwell. “It should be integrated across all modes and is key to delivering our objectives and meeting the needs of industry, the economy, other transport users and the environment. Delivered holistically, this will allow the economy of the North to be more productive, efficient and sustainable.”

While some observers may be surprised by the Freight Strategy conclusions on road transport, it does emphasise the extent of the latent market for rail freight in the North. The extent to which the sector’s market share has declined is in part down to the demise of traditional heavy industry in the region. However, by expressing support for the less polluting and more energy-efficient movement of goods on the transport network as a whole, there is a leading role for traditional rail freight in the future economy of the North. “Maximise the utilisation of rail, inland waterways and local distribution hubs to improve efficiency and support the modal shift of goods from road to rail and water”, says the report. “TfN expects to see optimal use of infrastructure for the efficient flow of goods on the major road network and the regional rail network.

Decarbonisation on the roads, says the report, is imperative and more easily achieved in the short term. Road hauliers may disagree. The cost of replacing already fuel-efficient trucks with new vehicles may not be as economically attractive as the alternative: government-funded railways electrification and redeployment of fleets to short-haul operations from those freight hubs proposed in the report. “The aim of this strategy is to undertake an overarching analysis of freight requirements across road, rail, port and inland waterways in the region”, says TfN. “[To] identify key constraints or challenges on the existing networks, and provide a list of possible areas of work including developing business cases for interventions and policy solutions that will best support economic growth and decarbonisation.”

1.
Quality of service rendered is low, too low!
2.
Sooner the better, an upgrading from railways todays low axial load should start! Simply, current standards no longer is optimal.
(“Longer and heavier”, in no respect is sustainable.)
3.
Electrification, yes, but an optimal. (Redundancy -hybrid- is needed.)
3.
For benefitting of Advantage, nearness to ports, resilient, high quality railways, is a must!
4.
Weak Link of chain (railways) has to be the now attended!