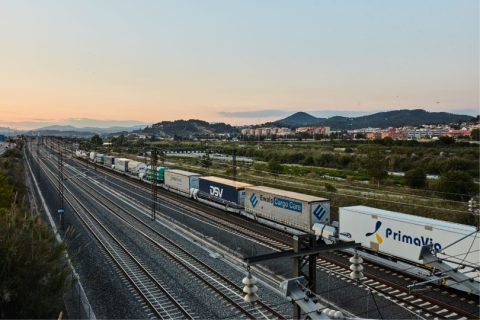 The share of rail freight transport is projected to double until 2050. In order to handle the growing volumes, a public investment of 490 billion euros is needed into the TEN-T rail infrastructure. This comes down to 16.3 billion euros per year. Such is the conclusion of a study called the Roadmap to Zero Carbon Combined Transport 2050, presented by d-fine on behalf of the UIRR on Wednesday 30 November.

Based on the growth prognosis of rail freight in the EU, the rail freight volumes counted in tonne-kilometres are expected to triple by 2050, from 400 in 2020 to 1,150 tonne-kilometre per year. Combined transport will grow even faster: by 360 per cent over the coming 30 years.

As a result of the increasing transport volumes on rail, the number of freight trains is projected to double: from 6,100 in 2020 to 13,800 in 2050. And as the number of truck journeys is expected to decrease, the modal split of rail will grow too: from the current 22 per cent to 44 per cent.

Where is the gain?

However, more can be reached in terms of infrastructure capacity. A huge gain will be made in the increase of train speed to 100km/h, this will result in 61 per cent more capacity on the network. ERTMS and TimeTable Redesign will also mean a great deal, but the largest gain is likely to be achieved by eliminating bottlenecks; the consultant estimated that the capacity could triple by doing this.

When you add everything together, the potential capacity increase within the existing infrastructure is 150 per cent, according to the study. But, in order to realise this, money is needed. All the requirements mentioned will be met with the TENT- measures scheduled until 2050, but investments are needed. To be precise, it will require 490 billion euros in public funding.

In addition, the private sector will need to make investments. The terminal infrastructure and other intermodal assets will require net new capital inflow. 300 more terminals are needed, and these need to be digitalised. Existing terminals need to be upgraded. All of this could add up to a 100 per cent increase of the capacity of terminals. But this would require another 47 billion euros coming from the industry up till 2050.