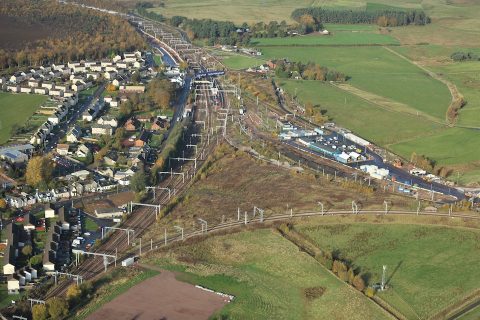 At the junction of the West Coast Main Line where Anglo-Scottish traffic meets, capacity enhancements are made. The Scottish junction, where traffic for Edinburgh and Glasgow converges, is being upgraded by the infrastructure agency Network Rail. Some of the capacity at the junction, removed in past decades, is being reinstated and updated to handle faster passenger operations and longer freight trains.

Work at Carstairs Junction is vital to capacity enhancements in line with increasing demand from Anglo-Scottish traffic on the West Coast Main Line, already Europe’s busiest mixed-traffic route. The junction is considered to be a major bottleneck on the network.

Network Rail has announced the completed installation of 121 new overhead electrification structures as part of the wider project to upgrade and remodel Carstairs Junction. This is part of a phased programme of investment in the key junction on the West Coast Main Line, which will simplify and upgrade the track layout to clear an existing bottleneck on the network and enable the separation of non-stop passenger and freight trains from those stopping at the station. The collateral benefit of improved freight handling opens up the possibility of reinstating a more frequent and wider passenger service at the station.

Work to date at Carstairs Junction represents an investment of more than one hundred million pounds (120 million euros) to rationalise and simplify the track layout and modernise the signalling through one of the most critical sections of the Scottish rail network. The junction is also intended to serve Anglo-Scottish trains originating from the High Speed Two project. Current plans are for pairs of trains bound for Glasgow and Edinburgh to traverse the WCML and diverge at Carstairs.

As well as handling north-south movements, the junction has an east-west chord, which provides a predominantly freight route across Scotland. The installation of new sections of track and modern signalling will speed up journeys between Glasgow and Edinburgh and will accommodate the longest freight trains on the network.
Network Rail in Scotland say that over the last 18 months, teams from industry partners Siemens, Rail Systems Alliance and SPL Powerlines have been carrying out heavy engineering on the railway embankments through the junction, as well as installing the new overhead line masts and signalling system. That phase of the upgrade programme is nearing completion.

Meet the needs of today’s railway

Despite being largely restricted to Saturday nights, the project has delivered more than 3000 metres of track renewals and 1500 metres of drainage, installed the new overhead structures, and started the process of removing life-expired equipment. “Much of the equipment through the area is nearing the end of its operational life span”, said a Network Rail statement “The layout of the junction is no longer suited to the needs of today’s railway in terms of supporting the pattern and volumes of service.”

The next phase of work, to be carried out in 2023, will see the addition of another 4000 metres of new drainage and further earthworks. “We’re now gearing up for the final construction of the new track layout”, said Jim McCleary, programme manager at Network Rail. “[This] includes 10 kilometres of track and 27 new sets of switches and crossings. Access to the railway at this critical junction is very limited, but the team has worked hard with the wider industry to balance the needs of train operators with the longer-term benefits that will come from modernising the track, signalling and overhead line equipment.”

Carstairs Junction sits 26 miles to the South-East of Glasgow on the West Coast Main Line. The triangular junction provides a route between Glasgow and Edinburgh and both Glasgow and Edinburgh to the south. On average, more than 200 freight and passenger services pass through the junction on an average midweek day, handled by twelve different operators, including those originating at the recently rail-connected Ravenstruther Quarry.