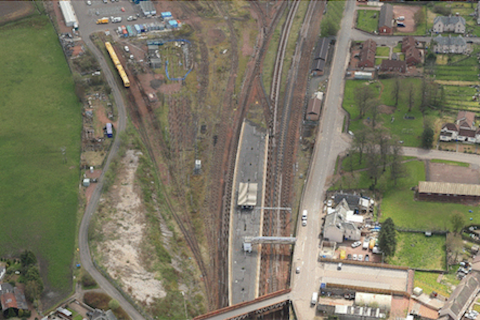 Carstairs remodelling: all services will benefit from the project

A major project to eliminate a speed and capacity bottleneck in Scotland will affect the entire rail network. Work to remodel the layout at Carstairs, where the busy West Coast Main Line diverges for Glasgow and Edinburgh, will remedy the speed restrictions, particularly for Edinburgh services, and go someway to reversing the folly of rationalising the junction in the 1980s when faster bypass lines were removed. The project also includes provision for freight loops, which will accommodate the longest trains on the network and help facilitate further freight ambitions, notably the nearby Ravenstruther bulk loads terminal.

The Scottish government prompted the project to remodel Carstairs Junction through their Transport Scotland agency. Although not as high profile as the electrification programme, nor the new branch line to Leven in Fife, it will impact all rail users in Scotland and elsewhere in the UK. By freeing up extra capacity on the West Coast Main Line, the busiest mixed-traffic line in Europe, it will help facilitate cross-border and domestic Scottish freight and passenger services, as well as provide capacity for the anticipated high-speed services to Glasgow and Edinburgh, which will run through from the HS2 project further south.

The Scottish government, which has devolved responsibility for transport infrastructure north of the border, says the Carstairs Project will improve punctuality, infrastructure reliability, and line speeds on the west coast mainline and on routes between Glasgow and Edinburgh via Carstairs. “Our new flexible layout will also include a freight loop to accommodate longer trains”, says their statement. The project forms a critical part of the 2021 Strategic Plan, published earlier this year by the government in Edinburgh.

The project has moved forward, with the initial appointment of contractors now underway. Carstairs will see itself at the centre of activity once again, having seen its importance diminish over the decades. The junction station was formerly busy with operations to marshal passenger services from Edinburgh and Glasgow, which joined or separated at the station to run as a single unit to Preston, where a similar procedure was performed to split trains for onward running to Liverpool and Manchester. In the past, it was also a stabling and marshalling point for banking locomotives, particularly to help heavy freight services conquer Beattock Summit.

Currently, the line at Carstairs requires regular maintenance work and speed restrictions are often imposed, which have a detrimental impact on operational performance. “Focusing on making improvements to what matters most to freight and passenger users, the plans will target punctuality, reduction in overall journey times and improvement of infrastructure reliability”, says a statement attributed to Scotland’s Railway, the overarching collaboration between government and Network Rail.

As part of the new railway infrastructure, Scotland’s Railway says they are building the biggest freight loop in Scotland. “When complete, this will be capable of holding a train 775 metres long”, says their prospectus. “Other modernisations to the junction include a new power supply which allows us to switch off the overhead lines remotely. As well as being more reliable, the remote access will allow us to carry out maintenance more efficiently and reduce the amount of time the railway is closed.”

“Preliminary works and detailed design are already underway”, says Paul Hadley, the editor of Freight Titbits, a subscriber-led forum. “Completion is planned for late-2023. One particular feature that has been mentioned is ‘Scotland’s longest freight loop’, able to hold maximum length 775m trains clear of the West Coast Main Line”, he says. “It is probably pertinent to mention that the nearby dormant Ravenstruther opencast coal loading facility is likely to be re-purposed as a loading point for stone from the nearby Cloburn Quarry, noted for its red granite that is widely used as railway ballast.”