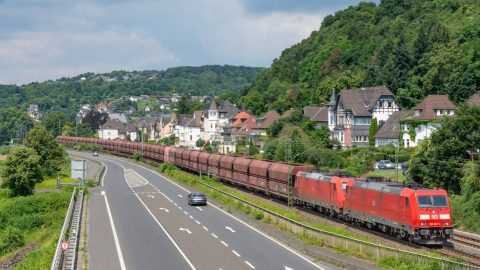 ‘Disruptions due to coal transport prioritisation should not be ruled out’

Everything goes according to the plan regarding coal transport by rail, says Deutsche Bahn. The federal government’s prioritisation plans seem to be working with the country’s first major energy production plants receiving regular trains. However, delays or train cancellations due to the priority corridors should not be ruled out, said the federal government’s parliamentary state secretary and logistics commissioner, Oliver Luksic.

In an interview with RailFreight.com a few days ago, DB and the Network of European Railways (NEE) explained that everything currently runs smoothly on the coal transport front. With relatively few requests by RUs to undertake coal transport, prioritised traffic accounts for six daily trains since the beginning of October.

DB also pointed out that “the punctuality of these trains has been above average and impact on the overall punctuality only minimal. No existing paths had to be changed”. However, Luksic did not exclude the possibility of disruptions in the short term.

Luksic pinpointed the apparent problem faced by the German railway network, meaning its heavy usage. He said that the federal government did its best to create the needed legal framework to prioritise trains carrying coal; however, he claimed that it is impossible to promise that this tactic would not cause disruptions at some point.

For DB, the main focus of coal transport currently lies in Saarland, in Germany’s east and on the border with Luxembourg. The company fuels two energy production plants in the region, STEAG and Bexbach. Sigrid Nikutta, board member for freight transport at DB, claimed that the company “assumes full responsibility for Germany’s energy supply”. Of course, with not so many RUs willing to participate in the project, it makes sense that DB would be the frontrunner, even though it cooperates with two plants for now.

What would happen, though, if coal traffic increased in the coming period? “We can only succeed in ensuring the supply of the coal-fired power plants if we work together. The locations in Saarland, in particular, are of great importance for the country’s energy security,” commented Luksic, who made clear that the term “prioritisation” will be used in practice and not just in theory. That is why he stressed the possibility of network disruptions.

The federal government’s mandate to prioritise coal transport by rail also included a cluster concerning the use of rolling stock under those circumstances. Specifically, the ordinance allows the reactivation of noisy wagons in the case of equipment scarcity. NEE pointed out that no such measure has been in force so far because the traffic is manageable.

Yet, DB claims to be prepared for that occasion too. Interestingly enough, though, the German company seems unwilling to use noisy wagons. Instead, it is retrofitting older and unused wagons with whisper brakes before deploying them. “The modernisation of more than 1,000 coal wagons is currently in full swing. Some of these were in storage and are now being reactivated and retrofitted with whisper brakes,” stated the company.

Track capacity, as well as added utilisation of assets, remain Priority – regardless of current energy crisis,
For railways, by nature short of redundancy, resilency – and of robustness, now a decisive upgrading of infrastructure, since long, has been needed…
At any current investment , however standards have to prove optimal, thus to meet with requests clients supply chains , where risks means costs – inflation, etc.
(For majority, now on road trucks is single available alternative.)