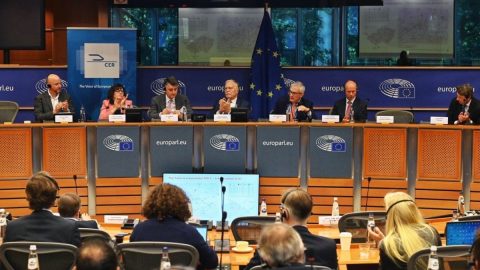 How will Ukraine and Moldova join the TEN-T network?

The Community of European Railway and Infrastructure Companies (CER) will amend the TEN-T proposal to extend four corridors to Ukraine and Moldova. Specifics on how they will be included were presented by Alberto Mazzola, executive director of CER, at a conference at the European Parliament in Brussels on Tuesday, 11 October.

For the North Sea-Baltic Corridor, the idea is to connect it to Ukraine via Lviv, Kyiv, and Mariupol. When it comes to the Baltic-Black-Aegean Sea Corridor, CER suggested adding Lviv and Odesa in Ukraine and Chisinau in central Moldova. The city of Lviv is being considered as an addition to the Baltic Sea-Adriatic Sea and the Rhine-Danube corridors.

Moreover, the new proposal includes additional deadlines and highlights the importance of the adoption of the European gauge. These new implementations will be soon published in a report that will be discussed with the EU member states, as MEP Dominique Riquet stated.

A new timetable and new goals for the TEN-T network

A TimeTable Redesign (TTR) was also presented by Mazzola to meet the TEN-T infrastructure targets. The goals previously set by the EU for rail were presented on a 20-year plan between 2030 and 2050. The extra checkpoint of 2040 was included in the revised schedule. With this new organisation model, CER is expecting to create a more structured dialogue and make more efficient financial plans. 2030 will be the deadline for the Core Network, 2040 for the Extended Core Network, and 2050 for the Comprehensive Network.

In addition, CER is implementing three further improvements to the amended proposal. First, the implementation of the P/C400 loading gauge to a predefined list of rail freight routes in the core network. The importance of having the same loading gauge in the continent, as Mazzola explained at the conference, would help to solve one of the main problems that rail freight is currently facing: border crossings. “Trains cannot cross borders because of different gauges,” he explained, adding that the European Commission will invest only where the P/C400 is adopted.

Finally, CER is pushing for the decommissioning of ERTMS class B systems as well as mixed speeds for passenger trains to guarantee more adequate travel times.