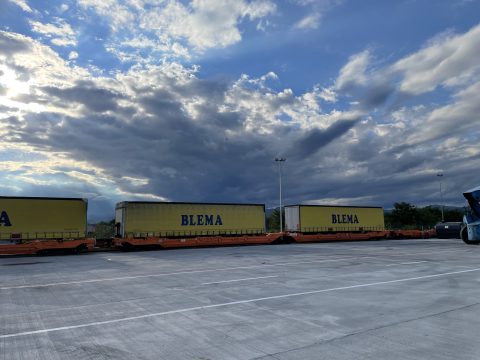 With this Duisburg-Romania train, Middle Corridor gets new perspective

The brand new terminal of Teiuș in Romania is now connected to Duisburg, with a new weekly roundtrip that started last week. To be precise, a train is running once a week between Teiuș International Intermodal Terminal (TIIT) and the Samskip terminal Krefeld Uerdingen, around 12 kilometre southwest of Duisburg, on the left bank of the Rhine river.

This week, a second round is up and running, explains the passionate Rafael Niculescu, who works for Unicom Tranzit, the rail freight carrier that operates the terminal in Romania. TIIT was opened in Spring this year and aims to become the new rail freight hub of Romania. Once it links to the port of Constanta, it can play a major role on the Middle Corridor too.

The new connection with Duisburg crosses the border with Hungary at Curtici, runs via Hegyeshalom and Passau to eventually reach the final destination Krefeld Uerdingen in 48-52 hours. A second roundtrip is in the planning for December/January, depending on the delivery time.

“The main market we are aiming at is truck companies, since we are 19 x T3000 double-pocket wagons. However, we also transport containerised cargo, as this type of wagon is suitable for all kinds of containers or swap-bodies”, said Niculescu.

Connections to Milan and Constanta

The company however has more plans on the shelves. The connection Teiuș – Milan, which was the first to be launched when the terminal became operative, will be expanded with a second departure in Q2 of 2023, targeting the same trucking segment of the logistics industry. “For this service we use a 16 x T3000 train composition due to the train parameters on the Italian side.”

A third short-term project of Unicom Tranzit is to play a role on the Middle Corridor with a connection to the port of Constanta. “We plan to serve the maritime businesses to and from Central Romania or the Eastern European region with Constanta Port, but we also offer this connection together with our running Teiuș – Duisburg service for customers on the Middle Corridor, with traffic between Europe and China.”

“We think we could offer a steady solution on the Middle Corridor with the route Constanta Port – Teiuș – Duisburg. This is a good solution for the container flows that come in via the Black Sea, but also a good connection for traffic that runs via Istanbul.”