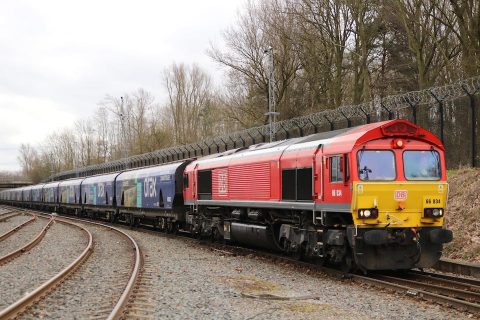 The UK’s leading producer of renewable energy has thrown its weight behind the ‘Freight Belongs on Rail’ campaign, championed by Doncaster-based DB Cargo UK. The company’s eponymous power station complex in North Yorkshire is served by around 3000 DB Cargo trains annually, delivering biomass pellets to fire the generators.

The Drax Group is, so far, one of the biggest corporate enterprises to add its voice to the highly-visible DB Cargo UK ‘Freight Belongs on Rail’ campaign. Drax Group, which operates sustainable biomass, hydroelectric and pumped hydro storage assets across four sites in England and Scotland, has called for more capacity on the network and for rail freight to be given a higher priority when allocating train paths.

Plant Director Bruce Heppenstall said rail freight was a much safer and sustainable method of transporting the pellets than the road, taking some 192,000 heavy goods vehicles off the congested UK road network each year. “We firmly believe that freight belongs on rail, and the more product that can be transported by rail, the better”, said Heppenstall. “It is safer, more predictable and reliable than road. Anything that can be done to stretch the capacity of the network would be welcomed by Drax Group.”

Recognise the value of rail freight

Rail freight kept the Drax power station running during the exceptional flooding in early Spring of 2020. The complex was completely cut off, except for the rail line that delivers biomass fuel to the site. “Rail freight is already a well-established and important part of Drax’s supply chain, which is growing year-by-year”, said Roger Neary, DB Cargo UK’s Chief Sales Officer.

Every train that DB Cargo UK operates into Drax Power Station carries enough biomass fuel to power a city of around 200,000 inhabitants for a day. That’s about the size of York, Dundee or Southampton. “It’s a vast operation and one [of which] we’re very proud to be a part”, said Neary, who is equally behind the campaign. “What we need now is for government to truly recognise the value of rail freight by setting a target for modal shift that will drive further investment in the industry.”

According to company figures, Drax Group produces six per cent of the UK’s total energy needs, and seventeen per cent of its renewable electricity needs.

For clients, now, all…, is about risks. Simple risk of a risk calls for added depots – and added logistic costs, those currently too high and due for sustainable reducing.
Accordingly any technicality optimal when steam was shifted out, as current electrification, no longer is timely, etc., etc.