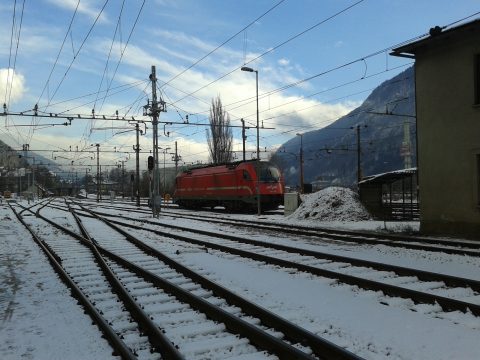 Slovenian Railways (SZ) has scheduled various temporary closures of rail sections and stations for maintenance works throughout the whole month of September. Eight lines will be under construction during this period. Moreover, two longer-term projects started in August are being carried out.

Most of the lines that will be involved in the projects are in the North-West of the country, close to the borders with Austria and Italy. Slovenia has also been dealing with overloaded ports in the summer, forcing infrastructure managers to announce a ban on loading cargo in July. These works are likely to cause some further traffic disruptions and delays.

Closures on the Anhovo-Nova Gorica and the Bohinj Railway

The Anhovo-Nova Gorica line, which runs for roughly sixteen kilometres along the Slovenian border with Italy will be closed between Wednesday 7 and Friday 9 September between 8:40 and 14:00. The section that links Bohinjska Bistrica and Podbrdo, about seven kilometres long in the North-West of Slovenia, will also be closed. In this case, the line will be unavailable to use from Monday 12 September at 9:00 until 17 September at 19:00.

The Bohinj Railway line, which is 129-kilometre-long will be closed on Monday 12 September between 10:45 and 16:45. The line connects Jesenice, close to the Slovenian border with Austria, and Trieste Campo Marzio, in Italy. The section between Rogatec and the Slovenian border with Croatia will be closed on Sunday 11 September between 7:00 and 19:00.

One week of construction on the Ljubljana-Jesenice

In addition, the railway connecting Ljubljana to Jesenice will be under construction in sections for more than a week. The section between Ljubljana and Kranj, 26 kilometres north of the capital, will be fully closed on Sunday 11 September and Sunday 25 September between 8;30 and 17:30.

The 14 kilometres of railways between Kranj and Podnart, not far from the Austrian border, will be closed during the night between Monday 12 and Tuesday 13 September, between 21:45 and 5:00, with an exception between 00:00 and 00:30.

Consequently, the Line between Lesce Bled and Jesenice will be closed the following night, between Wednesday 14 September and Thursday 15 September. The section will be closed between 22:10 and 5:00, opening between 00:20 and 00:50.

The rail line between Liubljana-Divaca will experience a process of modernisation that will be carried out by sections until 2027. In a notice sent by SZ, these projects are expected “to have an impact on the implementation of timetable on the entire SZ network”.

The Pragersko railway station, in the east of the country, is also being renovated. The station tracks, significant parts of the station area and interstation sections will be completely shut down for the duration of the project.