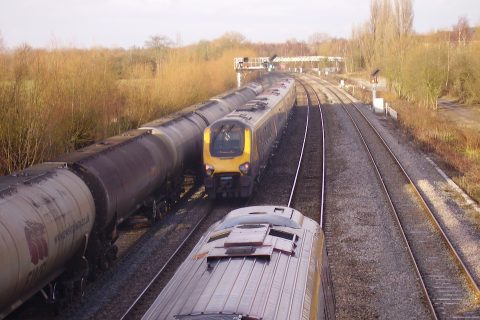 Network Rail has announced a timetable for the next phase of its strategically significant Oxford Corridor project. While the public eye has fallen on the major improvements to the passenger station in the city, the biggest winner will be freight capacity. Up to twelve new daily paths will be created on the strategic route connecting south coast ports with the industrial and logistics centres of the English Midlands.

The plans to improve rail facilities through Oxford will move on significantly in the coming month. A series of public meetings will unveil the scope of works through the historic university city. With work also continuing independently to establish the new East-West cross-country route, infrastructure agency Network Rail has significant additional plans to improve existing routes. Economically critical freight flows, principally serving the port of Southampton, will be the collateral beneficiaries of the project.

Oxford plays a huge part in the UK economy. Although a globally renowned seat of learning, the city is also a critical part of the national industrial curriculum. Oxford is also strategically placed between the Midlands industrial heartlands and the South Coast ports.

“Oxfordshire holds a strategically vital position for rail freight, particularly for intermodal and automotive flows between the Port of Southampton and the Midlands”, says Network Rail. “We are increasing capacity at Oxford station to accommodate additional services from 2024.”

Significant to the whole British economy

The advantages of an additional twelve daily freight paths through Oxford have not been lost on the industry at large. Smoothing the flow through the city of dreaming spires has considerable future economic benefits. For example, anticipated growth in the automotive industry in the Midlands will be well served by better connections with the principal automotive export hub at Southampton.

Freight traffic on the South Coast and Midlands route is growing. This direct route, which avoids the crowded lines around London, has been the focus of activities for Network Rail for some time. The improvements at Oxford have system-wide implications that could also be significant to the British economy.

However, those economic benefits will start with short-term disruption and closures. “This will allow work to be carried out on the track to create three high-speed crossovers, increasing from 25miles per hour to 75mph (40kph to 120kph) at Oxford North Junction. [These works] will cut journey times between Oxford and Bicester by two minutes and increase capacity.”

The nature of freight traffic, which is generally longer trains moving slower, requires level crossings to close for longer to allow safe transit. Network Rail has therefore tabled proposals to close a number of level crossings around the city. This follows a national policy to eliminate ‘at grade’ crossings where possible.

“The Oxford corridor is a key freight route from the port of Southampton to the Midlands and the north”, explain Network Rail in their plans. “Increasing demand for rail freight services means more train paths are required. More trains on the line would increase the risk at two level crossings along the route [at Sandy Lane and Yarnton Lane in Oxford].”

“Therefore, to reduce level crossing risk, improve safety and reduce instances of misuse, these level crossings need to be closed. Closing the crossings would allow us to provide capacity for an additional two freight trains per hour, additional Birmingham to Oxford services, and increased maintenance access and safety improvements. Options for closing the two crossings are currently being considered.”

Lines into and out of Oxford station will be closed over four weekends in September and October”, say Network Rail. The closures will allow installations of new track work and begin the journey to greater capacity through the city.