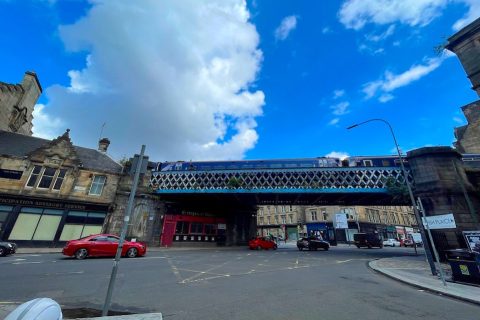 Network Rail has committed to renovating a freight route through the centre of Glasgow. The infrastructure agency is to invest in a programme of improvement works set to begin on a bridge that’s key to the City Union route and to freight resilience across Central Scotland. The work begins later this month.

Network Rail is set to begin work on a 3.8 million pound (4.56 million euro) restoration programme on the bridge. The twelve-month programme, from August 15 until September 2023, will include essential repairs to extend the lifespan of the bridge. It commits to the line as a link for future retention, and keeps alive hopes of a Glasgow cross-rail project. Network Rail say it’s part of their commitment to running a safe and reliable railway.

The Forth Bridge – only smaller

Commonly known as the Saltmarket Bridge, the fairly standard structure straddles a main thoroughfare in the east of the city centre. It nevertheless represents a vital connection across Glasgow, frequently used for operational movements and freight. The line was an approach into a now closed city centre passenger and goods terminus.

The wrought-iron structure on the City Union Line is more than 150-years old and provides a diversion route for freight traffic, and a route for passenger trains to reach Shields Depot in the south west of the city, where they are stabled and cleaned. Residents and businesses in the area have been advised of the work, which will involve noisy ‘rivet-busting’ and ‘grit-blasting’ activities, as well as metalwork repairs and painting. The work is similar, but on a smaller scale, to that carried out over the last decade on the famous Forth Bridge structure.

“Vital maintenance and renewals work such as the work at Saltmarket Bridge helps Network Rail continue to run a safe and reliable railway throughout Glasgow and the surrounding areas”, said Suzanne McKay, Scheme Project Manager at Network Rail. “This essential work will not only greatly improve the look of the 150-years old structure but will extend its lifespan for up to two decades. We appreciate the impact of our activity will have on those living closest to the bridge and while we will do all we can to minimise this, we are limited in terms of what measures can be put in place to mitigate against some the nosier elements generated by the heavier engineering.”

The project is part of a wide-ranging bridge modernisation programme across Scotland, as part of a four billion pound (4.8 billion euro) investment to increase reliability and improve performance. Glasgow has the largest suburban railway system in the UK after London. Advocates would like to see it improved further with better cross-city connectivity. The Saltmarket Bridge could have a busy future ahead of it.