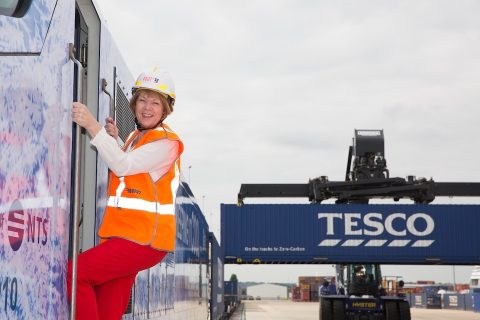 The rail minister Wendy Morton, who is also a member of Parliament in the West Midlands, was hosted by her parliamentary colleague Jackie Doyle-Price, the MP for the Thurrock constituency, have inspected supermarket retailer Tesco’s UK-Europe rail hub at the Port of Tilbury. The ministerial visit follows the company commissioning its five million pounds (5.98 million euro) investment in new rail freight services.

Tesco’s rail operations at Tilbury have been more trebled in value at a stroke by their multi-million-pound investment. It builds on their existing facilities at the port and critically includes the introduction of a new temperature-controlled rail freight service. This will support Tesco in delivering fresh produce from European suppliers through the Port of Tilbury and across the UK. Thurrock is already host to a distribution centre for the company, Britain’s biggest retailer.

Increase rail freight across the UK

“The increased rail service will not only boost resilience in the supply chain but also be considerably greener, with each train removing around 40 trucks from the road saving approximately 9,000 tonnes of CO2 each year.”

As part of the visit, the Minister and the MP were given a tour of the site and got hands-on with the loading operations. Tesco has committed to meeting net zero emissions across its value chain by 2050, including those generated by the products it sells. It has also said it will meet this target in its supply chains – and rail will play a role in that commitment. Tesco was also the first major retailer to set science-based targets to meet the Paris Climate Commitments.

“Rail freight plays a vital role in safeguarding the resilience of our supply chains whilst taking traffic off our roads, offering a cleaner, greener alternative for businesses nationwide”, said Wendy Morton said. “It’s fantastic to see a major company wholeheartedly backing our railways by investing in new equipment.”

The Rail Minister is no stranger to freight development. Her Aldridge-Brownhills constituency is on the doorstep of the West Midlands Interchange. Her relatively recent appointment in February has seen her engage with the industry, developers and customers at large. As part of the ruling Conservative Party, she has rarely been drawn on the current leadership contest, although she has consistently backed Lis Truss, who is the favourite to take over as Prime Minister. Her boss at the Department for Transport, Grant Shapps, was an early runner in the poll to replace Boris Johnson.

Speaking of the matter in hand, Morton reiterated that the government was committed to net zero by 2050. “So, I welcome Tesco’s five million pound investment as they work towards becoming a zero-carbon business”, she said.

Most to gain from moving freight to rail

Tesco’s rail operation in Tilbury is part of a broader economic contribution to the Thurrock constituency, which supports over 3,000 jobs locally. In a slight overstatement which the sector at large may debate, Jackie Doyle-Price said that her constituency played a central role. “Thurrock is the logistics capital of the UK”, she said. “There is a higher concentration of logistics jobs than in any other area of the UK. We have the most to gain from moving freight from road to rail. I am very pleased to see this investment by Tesco.”

Tesco’s commitment to rail freight has never been in doubt. Their boldly liveried intermodal ‘Tesco trains‘ have been a highly visible part of the rail scene for many years. Their recent investment in temperature-controlled containers has been widely reported in business at large. “We were delighted to welcome the Transport Minister to Tilbury to tell her about the far-reaching plans we have to increase our rail distribution and reduce our carbon emissions significantly”, said Nick Allen, Tesco Distribution Director. “Tesco is the biggest retail user of rail in the UK, and it is the most efficient way of moving our goods quickly, so the benefits are practical for our business and the environment.”

“We are also planning to increase our efficiency of goods transportation by rail between the North and South of England, eventually replacing the transportation of 40 truckloads by road per day”, added Allen. Tesco say their new rail service will save about 9000 tonnes of carbon dioxide emissions each year and remove over 7.5 million truck miles (11.5m km) from UK roads. This is in addition to the 20 million miles (32m km) already removed by existing services.

Tilbury, along with London Gateway and the Dagenham hinterland, forms the Thames Freeport, which adds attraction to development within the locale. “Forth Ports’ rail freight strategy is focused on streamlining the path of fast-moving goods to the heart of the country’s key markets”, said Ross McKissock, Unitised Director at the Port of Tilbury.

“Tesco’s new refrigerated trains are a perfect fit for [our new development at] Tilbury2, which is a growing hub for European trade and intermodal connections. With daily rail services running to the UK’s largest retailer hubs and the capacity to take the longest 775-meter trains on the network, we offer market-leading low carbon distribution solutions, enabling clean, green and sustainable supply chains.”

When, now, proved Partner for refer products, then, finally, rails has proved high quality – and quality pays!
England/Scotland, in particular benefitting of nearness to ports, the by nature mechanised loading/unloading of ships, the railways is the device, by nature, etc., etc.
As other devices, those by air and by sea, for sake of the needed, added capacity, added utilisation of assets, simply for reduced costs, now urgently a decisive upgrading of infrastructure, the bottleneck, remains!