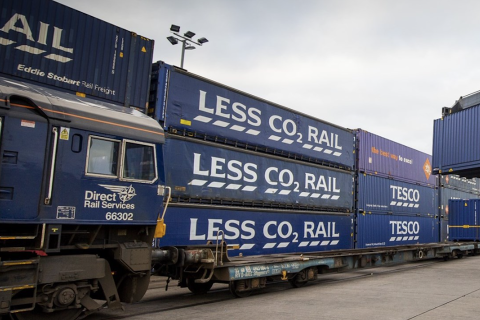 The largest of the UK supermarket chains, Tesco has extended its rail freight partnership with Direct Rail Services (DRS), the general cargo rail division of Nuclear Transport Solutions. DRS will continue expanding rial operations across Great Britain and supplying the retail giant. The current terms of the contract have DRS operate intermodal trains for Tesco in England, Scotland and Wales, including Mossend to Inverness – currently the longest domestic routing in Scotland.

DRS has long been associated with the so-called “Tesco trains”. The supermarket chain has used rail transport to move consumer goods around the UK for many years. The renewal of their contract to use rail freight comes as no surprise, but it is a feather in DRS’s cap. The supermarket business is notoriously competitive, and margins are constantly under threat. Changes of suppliers are common, so to retain the partnership again is good news for the freight carrier.

The familiar blue containers of the Tesco chain are seen as far north as Inverness, where the daily service runs to and from Mossend, near Glasgow, and connects into services to Daventry in the English Midlands – Tesco’s central distribution hub. “This is fantastic news and is a testament to the long-standing relationship we have with Tesco, built over the last ten years, and the excellent service we provide for our customers”, said Chris Connelly, NTS deputy CEO and rail director. “The environmental and socioeconomic benefits of using rail are well proven, and we are thrilled to be working with Tesco for at least another three years.”

Mossend services also run to Teesport, and there is a further Scottish flow between Coatbridge (just a short distance from Mossend) to Tilbury on the River Thames. Tilbury also serves Daventry twice daily. Two other Daventry workings serve Doncaster and Teesport, and a single working to Wentloog in the south of Wales.

At DRS, Connelly made the most of the carrier’s environmental credentials. “We’ll be maximising the use of our state-of-the-art Class 88 locomotives to move up to 76 HGVs worth of goods hundreds of miles and, when running on overhead electricity, with zero exhaust emissions.” Class 88 is a British homologated version of the Staedler Euro-Dual locomotive, operating on 25Kv overhead power or an on-board diesel. “Recently, we launched Tesco’s first refrigerated rail freight service, using the Class 88 locomotives, taking at least 17,000 containers off the road each year, saving 7,3 million road miles and nearly 9,000 tonnes of CO2e”, added Connelly.

“We’ve also been working with Tesco to trial diesel fuel alternatives which eliminate up to 90 per cent of carbon dioxide emissions (CO2e), opening up 62 per cent of the rail network, which doesn’t benefit from overhead electricity to extremely low CO2 rail freight”, said Connelly. “Every month, we transport around 12,000 containers travelling thousands of miles safely, securely and reliably to ensure shelves are stocked all year round across Great Britain, and I can’t wait to see what the next few years will bring.”