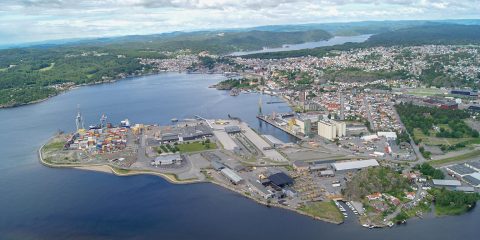 A new set of tracks put the port of Larvik in `Norway back on the railway map. The port hasn’t been active in rail operations since 2012. However, increased customer demand pushed the authorities to a pretty significant track reconstruction investment, and now customers reap the fruits of the modal shift.

The new railway tracks will benefit the timber and wood chip industry at large. “Wood chips from Bergene Holm in Amundrød near Larvik will run on rails to Norske Skog Saugbrugs in Halden”, said Bane Nor, the Norwegian infrastructure manager.

Company Norse Skog aims to fully utilise the new rail freight opportunities that could remove thousands of trucks from the roads between Larvik and Halden. “Norske Skog Saugbrugs is implementing the green shift in practice. From now on, all long-distance transport of timber and wood chips to the factory in Halden will go by rail. The entire conversion from road to rail has reduced the number of timber and wood chip lorries on the roads by 7,500 per year”, said Finn Arne Bjørnstad, supply manager timber at Norske Skog.

“The railway track at Larvik port results from the increased demand for the opportunity to transport goods by rail to and from Larvik port, and contribute to reducing emissions and heavy transport by road”, said Bane Nor, which has reported a 12 per cent growth in freight trains for 2021 compared with the previous year.

The port of Larvik was already connected to the railway network. However, its rail tracks fell into disuse in 2012. In 2018, Bane Nor invested 18,6 million NOK (roughly 2 million euros) in upgrading the long forgotten tracks. Reconstruction works included the replacement of ballast, sleepers, new switches, two new tracks and maintenance and control of the old switches.

“In the autumn of 2020, Bergene Holm, Norske Skog and Greencarrier approached the Port of Larvik with a desire to use the siding and terminal area at the Port of Larvik to transport timber and wood chips to and from Larvik. The railway track is now officially open, and Grenland Rail will run regular departures from Larvik late at night once a week”, concluded Bane Nor.