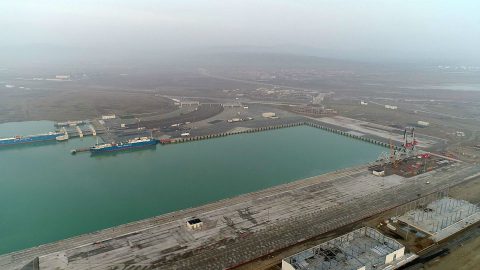 Port of Baku follows the Spanish in becoming logistics hub

The training centre of the port of Baku has signed a memorandum of understanding withEscola Europea – Intermodal Transport, a Spanish training centre. The Azerbaijani port on the Caspian Sea wants to build on the experience of the Spanish ports in establishing a logistics hub.

In the coming years, the Escola and the Baku Port Training Center will work together on an institutional development strategy for the Caspian sea port, with a special focus on sustainability.

The port of Baku wants to become a regional logistics hub, especially now its role is expected to increase on the international corridors. Baku lies on the Middle Corridor, connecting China and Europe. The Middle Corridor is an alternative to the main route via Russia and Belarus.

The training will present the strategies of the port of Barcelona and its logistics community related to sustainability and the environment. It will guide the Azerbaijani port in gaining a leading position on the transport corridors of the Caspian region, making them competitive and sustainable.

The collaboration resulted from a meeting in October 2021, when a delegation from the port of Baku traveled to Barcelona to learn about the strategy of the Catalan port. During this visit, the Azerbaijani delegation was introduced to Escola.

The port of Baku is a central node on the Middle Corridor, as it is here where trains from Europe are reloaded to vessels embarking on the Caspian sea journey, to ports in Kazakhstan, or visa versa.

The port of Baku is also an important transshipment point on the International North South Transport Corridor (INSTC), a 7,200 kilometer-long freight route connecting India, Iran, Azerbaijan and Russia via ship, rail and road.