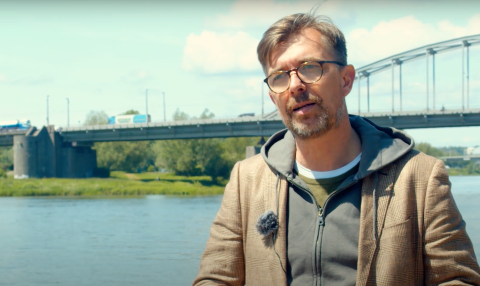 An energy subsidy for rail, a new bypass on the Rhine-Alpine corridor and better coordination of construction works. Those are three things the European rail freight industry needs in 2022 if it wants to develop further, says intermodal operator Hupac.

In general, 2021 was a good year for the company, despite the pandemic and many other hurdles. However, there is a lot that remains to be done if rail is to contribute to the climate targets. There is a growing interest of logistics people in competitive, climate-friendly transport solutions by rail. “With reliable services, we can meet the expectations of the industry and shift further significant volumes to rail”, says CEO Michail Stahlhut.

“The prerequisite is stable quality. This requires better management of construction works today and in the coming years and decades, especially on the Rhine-Alpine corridor. Disruptions and inefficiencies like those in the second half of 2021 must not happen again”, Stahlut points out.

By the end of last year, the European network was heavily disturbed by intensive construction works on the German network. These works were, according to the industry, poorly coordinated too many at the same time. Alternative capacity was limited, and as a result traffic came to a near standstill, according to various labboy groups. As Germany is the backbone of the European railway network, the situation had a huge impact on traffic overall.

“Keywords for a sustainable improvement in quality are the organisation of weekend resets to stabilise the traffic situation, the improvement of construction site coordination between infrastructure managers and efficient traffic management with a noticeable reduction of disruption times”, Hupac states.

It also calls for the establishment of international bypasses, such as the upgrading of an alternative route on the left bank of the Rhine between Karlsruhe and Basel. “The additional capacity we need for reliable traffic management on the feeder routes to the Swiss base tunnels can be created in the short term with relatively little funding”, explains Hans-Jörg Bertschi, chairman of the Board of Directors of Hupac Ltd. “The expansion of the north-south axis on the Rhine left bank is an important prerequisite for the full utilisation of AlpTransit and for the further shift of transalpine freight traffic”.

A further challenge for combined transport is the current explosion in energy costs, according to the operator. In various European countries, the costs for traction power have doubled or even tripled. The result is price increases that cannot be compensated for and that are putting a noticeable strain on the marketability of combined transport.

“The energy costs in rail freight transport should be evaluated in macro-economic terms,” demands Michail Stahlhut. “We can only achieve the Green Deal targets with competitive prices. A subsidy for electricity transmission costs – i.e. the price component for rail power facilities, overhead lines, etc. – would mitigate the current situation and send an important signal to the market.”

Despite the difficult economic situation, Hupac increased traffic volumes by 10.7 per cent to around 1.1 million road consignments in 2021. Last year, the Hupac Group carried 1,123,562 road consignments or 2,118,000 TEUs in combined road/rail transport and maritime hinterland transport. Compared to the previous year, around 100,000 additional trucks were shifted to rail.

All transport segments contributed to the positive development in 2021 to a comparable extent. Transalpine traffic grew by 11.8 per cent, which is due in particular to the successful use of the 4-metre corridor via Gotthard. In non-transalpine traffic (+10.4 per cent), the southeast and southwest Europe segments developed dynamically. In maritime container transport, ERS Railways, a Hupac Group company, made up for the pandemic-related traffic losses of the previous year and generated satisfactory volume growth despite the continuing volatilities. Stahlhut: “The support measures in various countries helped us to maintain our network during the pandemic and thus secure supplies.”

For the coming years, Hupac anticipates significant interest in combined transport as a contribution to achieving the net zero climate target. “With our Strategy 2021-2026, we are setting the course for growth that meets the Green Deal expectation”, says Hans-Jörg Bertschi. “With an annual volume growth of 7 per cent, we are aiming for a volume of 1.5 million road consignments by 2026.”

In the next five years, Hupac will invest 300 million Swiss francs in terminals, rolling stock and IT systems. It will also strengthen its offer in the core market of transalpine transport through Switzerland and work for productivity improvements to compensate for the reduction in subsidies. Other key development areas are southern Italy, Spain, eastern and south-eastern Europe.