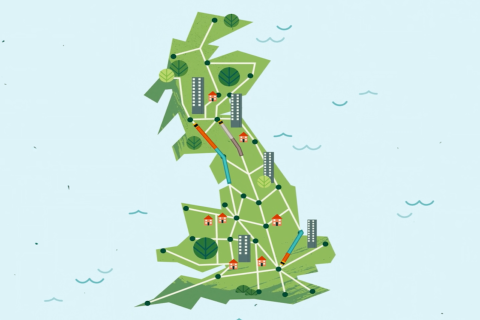 The UK government infrastructure agency Network Rail has not quite renounced its passengers’ first strapline, but a new video short promotes freight and lays the tracks for changes to come. The video extols the virtues of rail freight as a means of greening the economy and starts the process of handing over the reins to the new Great British Railways, the overarching agency that will supersede NR in a few years.

Part promotion for the rail industry, part answer to the political agenda, Network Rail’s new freight animation nods towards the UK government’s levelling up agenda to realise the economic potential of the north of England. It also features a fashionably north of England accent to the voiceover, not subtly emphasising the point. The similarity to the HS2 company’s style has not been lost on the industry either, which may be related to the recent abandonment of that project’s Eastern Leg, which would have connected several cities and the East Coast Main Line to the high-speed network.

Network Rail’s passengers’ first line has never been very popular with the rail freight community. It’s even been a source of some embarrassment within the freight side of the agency, which has always been at pains to promote its commitment to those operators who handle cargo that doesn’t load itself. The new video emphasises the rail freight contribution to the overall UK economy, claiming over 1.7 billion pounds (1.9 billion euros) of added value for Britain. It says it is an indispensable part of the British economy and an essential component in supporting economic recovery and long-term sustainable growth.

The supporting publication features the already gently ridiculed logo of Great British Railways – a multi-hued green adaptation of the former British Rail’ double arrow’ motif, which has remained the nationally recognised symbol of railway infrastructure – most commonly pointing towards a passenger station. However, whatever the public perception, there is plenty of evidence of Network Rail investment in freight handling. “We are enhancing the network to carry more freight traffic and make rail freight more competitive with other modes by increasing its efficiency”, says a statement supporting the Strategic Freight Network project (SFN).

The launch of the video refers back to the Rail Delivery Group report published last year, “Value Of Rail Freight 2021”. The weblink in NR publicity may be removed from service, but the sentiment is firmly favouring rail freight. “Businesses all around the country benefit from reliable and economical transport services”, says NR. “Each tonne of freight transported by rail produces 76 per cent fewer carbon emissions compared with road. With a freight train carrying as much as 110 lorries, an increase in rail freight would reduce Britain’s carbon footprint and cut traffic jams, too.”

If these claims seem familiar, they have been repeated often before, and not least in the animated video productions from HS2 Limited, the company building the high-speed line between London and Birmingham. If not produced by the same studio, there is undoubtedly a tribute being paid.