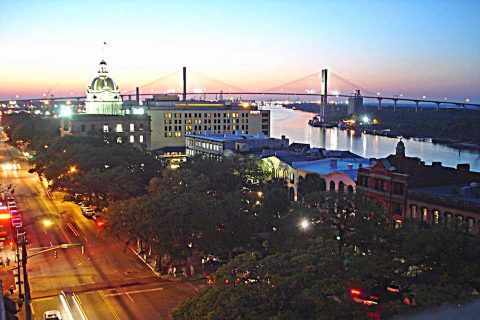 US Savannah states claim for freight belle of the South

The American port of Savannah has doubled its rail freight handling capacity at a stroke, adding nine more roads to its Garden City terminal. With a backlog of intermodal loads and almost half a million containers throughput in October, the new capacity cannot come on-stream a minute too soon.

The Georgia Port Authority has seen a 60 per cent reduction in the time containers spend on the terminal, as customers have begun moving cargo off-terminal faster. The improved cargo flow has allowed the Port of Savannah to reduce the number of ships waiting at anchor by 40 per cent. That, though, is just the spearhead of rail freight investment in the Peach State.

Savannah, coastal Georgia, is a modest settlement comparable to Dundee, Birkenhead or Newport. It is a lovely city with plenty for which it is recommended – but maybe not at the top of the tourist trail has been the freight harbour. At least until now. Project Mega Rail has changed all that.

The bustling port puts all those UK compatriots into the shade in terms of throughput. Breaking its own intermodal record, the Port of Savannah handled just over 504,000 twenty-foot-equivalent units (TEUs) in October, an increase of 8,7 per cent, year on year, and 6,000 TEUs up on March of this year, the port’s previous busiest month.

All that additional traffic has not come without congestion issues, which the Georgia Port Authority is tackling head-on, with a massive investment in rail freight handling. While North American logistics may be epitomised by the trucks that ply the highways and freeways, the impressive rail freight operations move mega-tonnages around the continent. To that end, Savannah has gone large on rail freight infrastructure investment.

“The massive new Mason Mega Rail Yard is coming online at the perfect time to help address the influx of cargo crossing the docks at the Port of Savannah,” said the Governor of Georgia, Brian Kemp, at an opening ceremony, filled with all the pomp and circumstance of an Elgar concert, reflecting the economic importance of the project. “The added rail capacity, along with new container storage on and off terminal, are already serving as important tools to resolve the supply chain issues for Georgia and the nation”, he said.

Emphasising the scale of rail freight operations in continental North America, the expanded terminal can handle 10,000-foot long trains. That’s 3048 metres in length – or the best part of four European intermodal trains. What’s more, the terminal can receive six of them – simultaneously, according to the Georgia Port Authority. That, though, is just the front of house operations. Backstage, there is a whole supporting cast at work.

“We’re setting up multiple inland locations that will be connected via truck or rail to the Port of Savannah,” said GPA Executive Director Griff Lynch. “We’re working with both CSX and Norfolk Southern [the port’s ‘class one’ rail freight partners] to provide inland and off-dock locations to move these long-dwell imports off the facility. We think this will make a huge difference for both importers and exporters as we clear out our yard.”

President Joe Biden recently committed the USA to a radical programme of improvement in rail freight infrastructure. In that spirit, the Georgia Port Authority South Atlantic Supply Chain Relief Program – of which Savannah operations are a spearhead – is funded in part by reallocated federal dollars. That investment will see overhauls for Norfolk Southern’s Dillard Yard in Garden City and the CSX Hulsey Yard in Atlanta.

“This is the relief we needed to regain terminal efficiency and speed up vessel service,” said GPA Board Chairman Joel Wooten. “By reclaiming this space on the terminal, we can begin to reduce the backlog of vessels at anchor. This groundbreaking partnership between cargo owners and logistics providers should serve as a model for the entire nation as we work to address supply chain challenges.”

Savannah may well far outstrip its Old Country compatriots for the adoption of rail freight capacity. However, if the UK government’s mandated targets for modal shift are to be met. The doubling of rail freight capacity in the UK will mean investments on the scale of Savannah will be needed and needed in places like Dundee, Birkenhead and Newport. The scenery may be different in British ports. Still, the scenario is similar to that faced in the cobbled streets and bougainvillaea-blossomed avenues of the southern belle city.