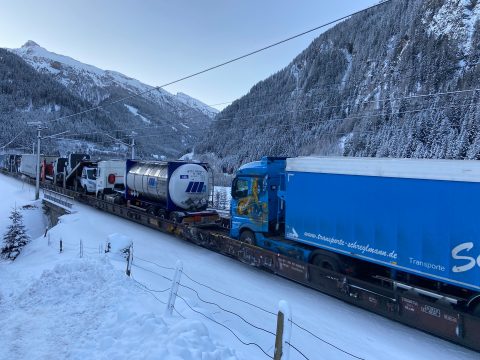 Rail Cargo Group is experiencing substantial growth in the sector of Rolling Road (ROLA) transport. The Austrian company exceeded by the end of October 2021 the transported volumes of 2019 and 2020. Connections on the Brenner axis enabled the increased volumes of this year.

The concept of ROLA, an abbreviation of the German Rollende Landstraße, is a crucial component of the modal shift from road to rail and the fight against climate change. With ROLA, whole trucks are loaded onto rail wagons and transported between terminals. During the trip, truck drivers can spend their time on the train and rest. It is a quiet solution since it removes trucks from roads that would otherwise be busy and noisy.

Rail Cargo Group offers ROLA connections as part of its network between the Wörgl-Trento terminals in Austria and northern Italy, respectively. Moreover, the company runs ROLA trains via the Brenner pass while it frequently deploys such trains between Wels, Austria and Maribor, Slovenia.

In 2021, RCG’s ROLA connections had momentum. The company transported 158,000 trucks on trains only by the end of October 2021. With the year not finished yet, the final number could be much larger. Compared to previous years, the company’s growth in this market segment is substantial.

The increased ROLA traffic along the Brenner axis is the key to the concept’s success. “This growth is almost entirely attributable to the significant increase in the number of ROLA connections on the Brenner axis, on which 135,000 trucks had passed through Tyrol by rail by the end of October,” comments RCG.