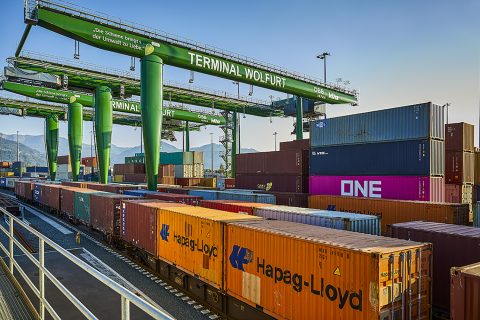 Rail Cargo Group’s connection between Wolfurt, Austria, and Rotterdam, the Netherlands, celebrates its fifth anniversary, accompanied by substantial growth and an upcoming expansion. 2021 seems to be when the route reaches a record of transported freight volumes, with the company targeting 18,500 TEUs.

The figures for 2020 were 16,600 TEUs. Due to the route’s success, Rail Cargo Group aims to provide further connectivity for Wolfurt-Rotterdam that will link to two Swiss terminals at the beginning of 2022.

Wolfurt is positioned in western Austria, close to the border with Switzerland and in the Lake Constance region. Its connection with Rotterdam, Europe’s largest port, enables transport flows between the border Lake Constance region and northern Europe, including the German ports of Hamburg and Bremerhaven. Moreover, Wolfurt’s position in Austria provides connectivity options with the Adriatic ports of Koper and Trieste.

70 per cent growth in five years

Since its opening in 2016, the Wolfurt-Rotterdam corridor has achieved volume growth of 70 per cent. Currently, the service offers three weekly roundtrips. Two of them connect Wolfurt with Rotterdam via Kufstein in Austria and back. The third one connects Rotterdam with Wolfurt via Frenkendorf in Switzerland. At Frenkendorf, trains can load and unload cargo and then forward it to Austria.

At the beginning of 2022, RCG wants to integrate eastern Switzerland into the Wolfurt-Rotterdam route. As a result, the company will launch three weekly connections between the Frekendorf and Niederglatt terminals and Wolfurt. Trains from Switzerland will then have direct access to Rotterdam but also Belgium and the port of Antwerp. In addition, the links could also extend to the south and the Italian ports of Genoa and La Spezia.