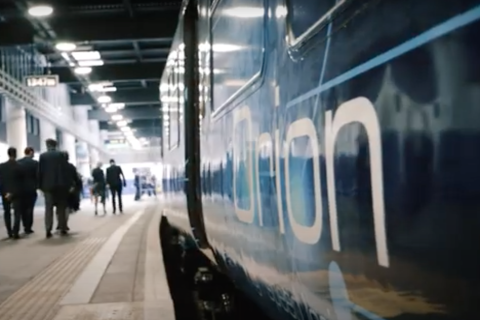 The light logistics sector is rife with speculation that a raft of projects are on the brink of entering into revenue earning service. The chatter is that Anglo-Scottish services could be the first to get the green light, maybe as early as later this week, and perhaps the high profile Orion service, backed by Rail Operations Group.

Light logistics, a modern-day reincarnation of the parcels service that was once a familiar part of railway operations all across the UK, is set to make its return. Observers say that lack of direct marketing points to a collaboration – possibly a contract agreement – with one of the established carriers.

It is no secret that redundant passenger electric multiple unit trains are being converted for use as express parcels trains. Unlike the parcels trains of the past, the units will be capable of keeping up with passenger services and therefore able to slot into available paths on intercity routes. Traction and rolling stock leasing company Eversholt Rail announced last week that they are to follow up their experimental train with four more conversions of class 321, four-car EMUs.

The units, designated Swift Express Freight, will be capable of 100mph and able to hold up to 12 tonnes of freight per vehicle. The initial unit was converted by Wabtec at their Doncaster facility, but the four further units are to be repurposed by Gemini Rail Services at their Wolverton works, according to Eversholt. The leasing company expects them all to be leased before the end of the year and in service in the Spring of 2022.

Most of the large rail freight operators have been mentioned in connection with an entry into the light logistics market. Specialist operators – set up specifically to serve the market – are also waiting in the wings. Varamis Rail, based in Doncaster, also has an eye on city centre to city centre operations, and plans to use electric multiple units too.

If the sector is to get rolling this week, it is likely to be a contract arrangement, serving an existing player in the light logistics market. There is online speculation that London to Glasgow will be the first route, and that the corporate customer could be Royal Mail. The national postal service already has extensive experience of rail operations, running its own fleet. Others speculated that the customer could be a familiar parcels operator like DHL, or even online retailer Amazon. Whom ever has the first train on the tracks, if they manage it this week, they guarantee a bumper Black Friday for the rail freight sector.