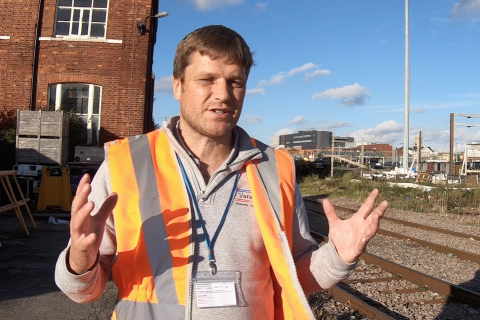 Soon from London: cargo on passenger trains at speed

Freight moved on passenger trains, at the speed of these trains and to passenger stations. If all goes to plan, this will be a reality as soon as December this year, when Varamis aims to launch its express light-logistics service between London and Scotland.

Managing Director Phil Read has told RailFreight.com that the company is working hard to get on the rails this year, with a fall-back position to a launch in early 2021. The company has its sights on launching a service for parcels and light logistics, directly into passenger terminals, using repurposed former passenger electric multiple unit stock on the main east and west coast arterial routes between London and Scotland.

Varamis Rail has been a long time in the making, but the day opening looks, finally, to be in sight. As COP26 concludes Glasgow, Phil Read would have loved to have demonstrated the environmental credentials of his company’s business model to delegates at Central station. However, while he may not be able to deliver that climate change package to world leaders this time, it’s the ordinary citizens of Glasgow and elsewhere who are on the brink of a first-class delivery and one made carbon-free into the bargain.

All eyes on light logistics

Read is not about to resurrect the old-style of parcels traffic, which he sees as being as much a part of history as the historic steam locomotives that once were built and maintained around his Doncaster Railway Works office. His Varamis Rail is very much a twenty-first-century solution to twenty-first-century needs. “It’s a new market because the logistics and supply chains are all used to very much doing things their way and have been for a long time”, he says. “With the environmental benefits and sustainable advantages, and the imperative for decarbonisation, there are a lot of conversations now open with the industry, to see how we can meet their targets in the future.”

Given the size of the light logistics sector, it is surprising to Read and his would-be competitors that the railway industry ever gave up on the traffic in the first place. However, the changes in passenger behaviour, which many commentators say will lead to a permanent reduction in overall numbers, has forced operators to look at new markets. It is a scenario pushing many passenger operating companies to look closely at Varamis Rail and others and examine how they are filling the gaps in demand and the capacity opened up by reduced commuting. “We’re confident that once we do start moving the trains, the parcels and light logistics sector will fly for us”, says Read.

Walking in the footsteps of innovation

High-speed logistics of a different era are also part of the heritage of the company’s Doncaster base. The former works in the railway town are not as busy as they were one hundred years ago, but Read has his company offices at one end of the vast building that Sir Nigel Gresley once called his workplace. That famous engineer was responsible for the design of the even more famous Flying Scotsman – the first steam locomotive recorded at breaking the 100 miles per hour barrier (160 kph).

Varamis intends to run services that will routinely reach that speed and deliver a sector that the railways in Britain largely abandoned during the privatisation and fragmentation of the industry in the 1990s. Some niche operators have thrived in the intervening decades, and some big players are poised to enter the market, but Phil Read has his sights set on a high-profile operation. Despite his Kent heritage, Read plans to connect London and Scotland with his own ‘Flying Scotsman’ and – if he does renew his driving credentials, as he has often threatened to do – he may well give a wave to that pioneer of the last century as he passes Sir Nigel’s office at speed.

Why can’t every express passenger train have a parcels coach ? Train paths are in short supply on popular routes. And then delivery by electric vehicles ? If we really want carbon neutralty we have to think outside the box.

Attach a loading carriage or two, to a passenger train.cutting costs, for light goods, or even for containers. They do that in Alaska and Canada, works well. mainline goods are carried by DB a German company. profitable for Germany not UK.
Keep things simple.