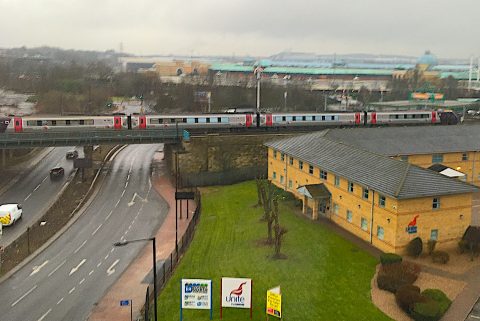 InterCity RailFreight and CrossCountry are to provide vital support to the medical sector across the UK. The long distance passenger train operator CrossCountry, which has the most geographically comprehensive network of all the passenger operators, and specialist carrier InterCity Railfreight are from today (4 March) teaming up to provide a key service transporting medical supplies across Great Britain.

As part of an initial trial, InterCity Railfreight, who have been moving parcel-sized freight using passenger trains since 2010, will be using non-public areas on some of CrossCountry’s trains between Scotland, the Midlands and South West England to facilitate a reliable, fast and more environmentally sustainable way of distributing medical supplies. The service will support the express roll-out of the UK’s Covid vaccination programme, as well as other critical parts of the health care service.

Sending time-critical consignments by rail will speed up the transportation of essential medical supplies, say CrossCountry. They add it will help improve patient care and help to reduce the burden on the National Health Service (NHS). The service will also reduce carbon emissions, with less road transportation required through city and town centres. Jeff Screeton, the managing director of InterCity Railfreight, has been eager to get the service underway. “We are delighted to be working with CrossCountry to unlock the potential of this unique national network of high-speed rail services, from medical shipments to e-commerce. Using spare non-public spaces on trains for time-critical logistics will help improve patient care and support the NHS”, he said.

His counterpart at CrossCountry, managing director, Tom Joyner, said the collaboration was not only innovative, but demonstrated how the railway industry could answer the UK government and prime ministerial pledge to make an improved economy as part of the recovery programme. “We welcome this opportunity as part of our Building Back Better campaign for rail to play a greater, more innovative role in the nation’s recovery from the coronavirus pandemic”, he said. “Using this spare space on our High Speed Trains means we can offer a fast, direct service, to our InterCity Railfreight partners initially between Edinburgh, North East England, Birmingham and the South West”.

Both operators cross the country

InterCity RailFreight has a decade of experience in moving small-volume parcel traffic on scheduled high-speed rail services, using spare secure spaces in areas of the train not accessible to the public. Their business model has no impact on passenger service operation, and provides light logistics operators with a service that exploits the high frequency of the passenger timetable. ICRF is already working in partnership with passenger train operators, Network Rail and locally-based delivery couriers, who are increasingly using electric vehicles and cargo bikes.

CrossCountry’s (XC) network is the most geographically-extensive passenger rail franchise in Great Britain. Their route map stretches from Aberdeen in the north east of Scotland to Penzance in the far south west of England. They also serve critical trade locations like Stansted Airport in the east of England and, via their hub of operations in Birmingham, reach out over England, Scotland and Wales. XC calls at over 100 stations and connects seven of the Britain’s ten largest cities with nearly 300 services every weekday.

The rebirth of parcels and light logistics is growing significantly in the UK, with several planned services coming on stream in the coming months. Technically, the sector presents some challenges to the rail sector, which will be addressed in the forthcoming RailTech Europe online conference later this month.