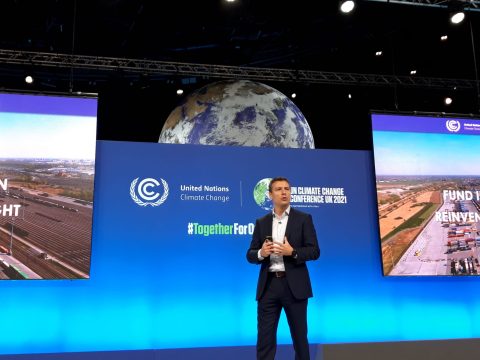 A spark of rail freight at COP26 in Glasgow

A convincing speech advocating rail freight was held by CEO of Lineas Geert Pauwels at the climate summit in Glasgow this Thursday morning. “To achieve the climate targets, rail transport is an indispensable link.” Pauwels presented five technologies to improve rail transport and is asking governments for support.

“The greatest threat to our planet is the belief that someone else will save it.” With this quote from Robert Swan, Lineas director Geert Pauwels started his speech at the climate summit in Glasgow. The speech resulted in a passionate plea for the rail sector. By striving for a doubling of rail transport by 2030, he believes the sector is already putting its best foot forward.

The numbers speak for themselves, he says. Trucks carry out eighty per cent of freight transport in Europe. This causes congestion, and contributes 20 per cent to European CO2 emissions. “And emissions threaten to rise further because a 30 per cent increase in freight transport is expected in the next ten years”, says Pauwels.

Lineas is a co-founder of Rail Freight Forward, a coalition of European rail carriers that want to stimulate rail freight in Europe. Because train transport reduces CO2 emissions by nine times and removes many trucks from the road, the rail sector believes that rail transport is an indispensable link to achieve the climate objectives and prevent European roads from getting congested.

Rail Freight Forward advocates a reformed European transport infrastructure with rail transport as the backbone. This requires the commitment of three parties, according to Pauwels. On the one hand, the rail carriers have to put a product on the market that wins the competition from road transport. On the other hand, infrastructure managers should improve the infrastructure and flow management so that trains can travel more easily through Europe. In Pauwels’ ideal image, the train commutes through Europe like a forklift through a warehouse.

The government should also support innovations to modernise the sector. “Broadly speaking, the train has remained the same in a hundred years”, he says. In order to achieve this modernisation, the rail sector has identified five important technologies. For example, the borders in rail transport must be abolished. “We need to move to a European rail management system, so that trains can traverse the states without red tape”, explains Pauwels.

The director wants to compensate for the lack of flexibility in rail transport by introducing a digital capacity management system. This will not only benefit the transport sector, he says, but can also help national infrastructure managers to make better use of their capacity.

The third technology identified as an action point by Pauwels and those involved in the rail sector is a single digital platform for information exchange. Not only the rail carriers and other players in the rail sector must be connected to this, but also the other modalities. Pauwels: “In this way, for example, the last-mile delivery can also be better coordinated with, for example, road hauliers.”

The speed of train traffic must also increase. According to Pauwels, this can be achieved with a digital, automatic coupling system. The process is currently still manual, which makes it time-consuming and not without danger. In the further future, he says, there is a role to play for self-driving trains, the fifth technology where development is required. In Pauwels’ ideal image, the train eventually commutes through Europe like an unmanned forklift through the warehouse.

At the end of his speech, Pauwels was asked by the audience whether the automation of rail freight transport would have an impact on employment. “There is currently a major shortage on the labor market. And the automation of certain processes does not have to lead to jobs disappearing, there can be a shift”, the CEO replies.

This underlines the necessity of Network Rail being granted what is required for the Ely development also described in this issue of Railfreight.com.