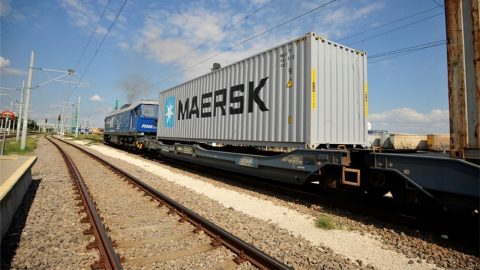 Maersk has done it again. It launched a weekly intermodal rail service in Bulgaria connecting the port of Burgas with Plovdiv and further to Sofia. The service serves two major customers-Jysk Bulgaria, a Danish retail chain branch and Mondi Papers, a packaging and paper company.

The new intermodal service covers the Burgas-Plovdiv section by rail, while cargo forwarding towards Sofia takes place with a short road leg. It integrates rail in the companies’ supply chain, connecting Burgas with the rail depot in Plovdiv and then directly with their stores and warehouses. The service will remove 40 kilometres of transit between the destinations while reducing CO2 emissions by sixteen times.

The example of Jysk and Mondi Papers turning to rail transport for a relatively short distance is not the first one implemented by Maersk. The logistics and transport company had the same plan in Spain. In collaboration with Ikea, it launched an intermodal service between the port of Barcelona and the Taraggona terminal by rail and further to the company’s distribution centre in Valls by truck.

As mentioned in the case of Ikea in Spain, it is vital that worldwide corporations enter the rail transport market even for short distances. Rail freight acquiring such customers translates into two things: firstly, rail is gaining the trust of shippers and big customers due to its efficient performance and competitiveness. Secondly, there is a cultural shift in the mindset of significant shippers who now look to alternative ways of transport instead of just road haulage.

The same applies to Jysk and Mondi Papers in Bulgaria, also because the country’s rail freight share is quite limited. As Maersk underlines, Bulgaria’s cargo transport sector is highly dominated by road. Despite that railways attempted to change the situation in the mid-2000s, the poor infrastructure maintenance and the network’s low speeds moved many companies to road transport.