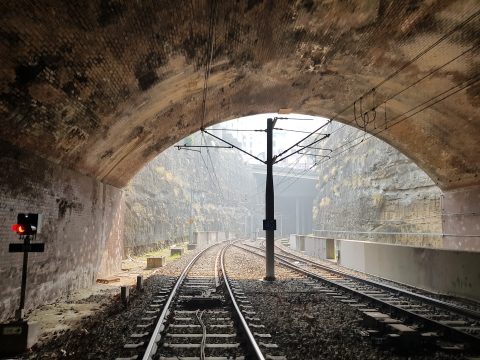 Bulgaria starts construction of the largest rail tunnel in the Balkans

Thursday, 15 July, was the starting point for the construction of the largest Balkan railway tunnel. The tunnel is positioned in Bulgaria, very close to the country’s capital Sofia and on the route between Elin Pelin and Vakarel. It will be 7 kilometres long, with two pairs of tracks, facilitating freight trains with speeds up to 120 kilometres per hour.

The tunnel construction is part of the “Modernisation of the railway section Elin Pelin-Kostenec” project, financed by the “Transport infrastructure 2014-2020” and “Transport connectivity” governmental programs. The whole project will cost 498 million Bulgarian Lev (approximately 255 million euros).

Apart from upgrading Bulgarian rail infrastructure, the project is significant because it will facilitate freight traffic along the Rail Freight Corridor 7, or else known as the Orient/ East-Mediterranean corridor, which is part of the TEN-T network. This is important because Bulgaria is a transit country for transport between central and southeast Europe. For instance, companies like the Rail Cargo Group or Hupac use its railway network and terminals on their way to Turkey.

Moreover, Ocean Rail, the company which operates trains connecting the Greek port of Piraeus and central Europe through the Balkans, recently launched a new service through Bulgaria. The trains pass from Kulata on the Greek-Bulgarian border and Dragoman near Sofia on their way to Serbia, Hungary, Austria, Slovakia and the Czech Republic.

Understandably, such a development might not seem significant when compared with other infrastructure projects in Europe. Nevertheless, for the Balkans, which is still a developing region for rail, it is crucial since it allows better connectivity through the mountainous landscape, which restricts the variety of options when scheduling a train service.