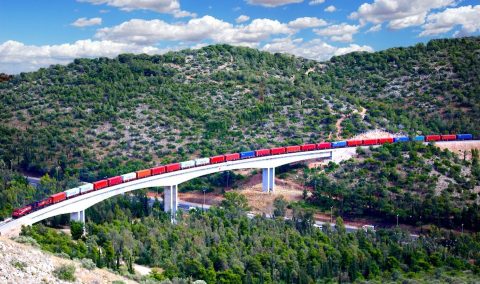 From sea to land, rail transforms transport through the Balkans

How much do we know about rail connections between Greece, the Balkans and Central Europe? What about connections between these regions and China through maritime transport? It might sound like fiction, but it is true: Ocean Rail Logistics, based in Piraeus, Greece, connects the Balkans with the heart of Europe, and from there, it can take cargo to the Far East.

The Land Sea Express, as it is known, is no ordinary railway service. Using the Port of Piraeus as its base, it travels through Greece, North Macedonia and Serbia, to reach Hungary, Slovakia, Austria and the Czech Republic. It transports imported cargo from China and other Far East countries. On its return from Central Europe, the train transports European products, which are then loaded on feeder vessels to travel to China.

As Dionysis Boulantzas, investment and development manager at Ocean Rail Logistics explained, the specific company is the only one operating and providing rail freight services from Piraeus to the Balkans and Central Europe. However, its most peculiar characteristic is that it combines sea and rail, building a new Eurasian corridor.

Ocean Rail was founded in 2017 and is a subsidiary of COSCO Shipping Group, which owns the Port of Piraeus. It is a holding company that  owns 60 per cent of PEARL S.A, the railway operator of the Land Sea Express, and the first non-incumbent railway operator in Greece. In 2019 Ocean Rail also bought a stake of 15% in Rail Cargo Terminal – BILK Zrt., a member of Rail Cargo Group (RCG) in Budapest and a major logistics hub in the CEE region.

It links Piraeus’ container terminal with terminals in Skopje, Belgrade, Rail Cargo Group’s terminals in Budapest and Bratislava, METRANS’ terminal at Dunajska Streda in Slovakia, and CTE container terminal at Enns in Austria. Its Trans-Balkan route doesn’t follow one of the official European Rail Freight Corridors (RFCs). As Boulantzas analysed, even if Greece connects with RFC 7 that passes through Bulgaria and Romania, the costs for using it could make the service unviable. Consequently, Ocean Rail uses another corridor, known among its users as Corridor X (Corridor Ten). This is not an officially recognised name by the EU, but a name that has been used for a longer time.

Planning of Land Sea Express’ trips relies on the demand for the shipping loads that arrive at Piraeus. The company doesn’t run liner trains, and subsequently, it has the needed flexibility to adapt its trips. “At the moment, and based on the capacities of the railway network, we operate approximately 31 to 32 trains per week”, said Boulantzas. Moreover, the company experiences constant growth. Indicatively, it started with 64 trains per year, and in 2020 it ended up with 1,300 trains. “This equals the growth of approximatelly 1,900 per cent. There is demand, there are developments, and hopefully, we will grow more if the costs to use rail remain at normal levels”, underlined Boulantzas. 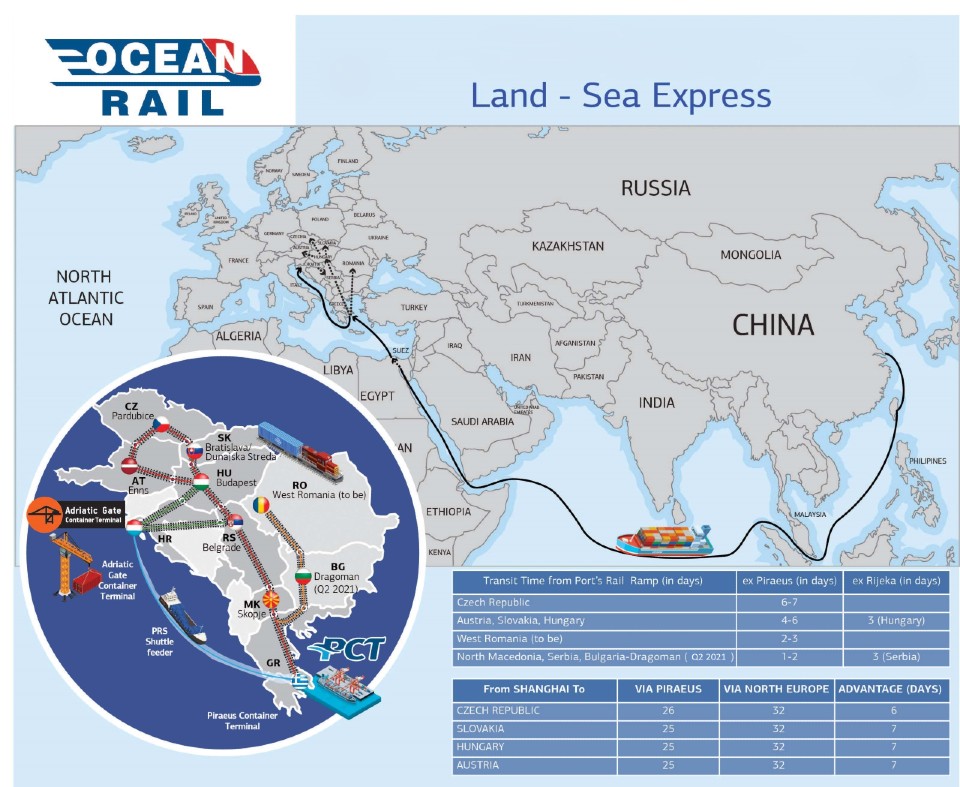 Additionally, Ocean Rail’s trains make complete roundtrips in Corridor X. They reach Central Europe full, but they also return loaded at least by 80 per cent, since there is demand from China’s side for exports. The cargo that the Land Sea Express transports is diverse, but electronics have the biggest share. This is because electronic companies seek the shortest transit time possible, and Piraeus offers it. After all, this is Piraeus’ most potent competitive characteristic: the relatively short transit times from Asia to Europe and the even faster transit times from the port to central European countries. In particular, cargo originating from Asia could reach Hungary or the Czech Republic in 25-26 days in total, from origin port to destination rail ramp.

Ocean Rail’s numbers might sound optimistic; however, Dionysis Boulantzas explained that the company remains humble and focuses on mid-term planning. “Especially under these circumstances with the pandemic, we do not want to take unnecessary risks. We prefer small but stable steps”, he said. Nevertheless, the company still has some aspirations. For instance, it would like to connect with terminals situated in the south of Germany or Poland.

Furthermore, a north-south freight corridor would not be something to overlook. Ocean Rail has considered in the past to establish such a corridor between Piraeus and Duisport, and similar plans might re-occur soon. Additionally, the company also keeps an eye on intermodal options and could engage with bulk cargo in the future. Everything depends on the demand for products by shipping companies, in any case. The company will take the next step, following its customers’ needs.

With a more realistic perspective, the company has some more plans in the pipeline: during Q2 of 2021, it wants to launch a direct and stable rail connection from Piraeus to Bulgaria, with one or two weekly trips. Finally, concerning the Land Sea Express, Ocean Rail anticipates the completion of infrastructural upgrades in the line between Budapest and Belgrade. “It constitutes a flagship project for the route that is going to make it significantly faster”, said Boulantzas.

Of course, like any other rail service, the Land Sea Express could not avoid problems during its development. Among the obstacles it still faces is the lack of sufficient infrastructure, especially in the Greek parts of the route. Boulantzas said that Ocean Rail’s number one priority is the railway line’s full electrification between the Ikonio terminal in Piraeus and Idomeni border crossing with North Macedonia.

Greece and Piraeus are growing rapidly and are transforming into Eurasian transport gateway. “We see electronics corporate giants choosing Piraeus as an entry point for Europe and as a logistics centre for warehousing and distribution to all of Europe, the Middle East and Africa. From our experience, since 2014, we see an upwards trajectory”, commented Boulantzas.

Piraeus connects with all base ports of China with mother and feeder vessels. Furthermore, it cooperates with the Port of Rijeka (Croatia), from where there is another rail connection to Budapest and Belgrade as part of the Land Sea Express. There is a growing demand for trains, meaning that rail freight finally acquires the needed and deserved space in the region.

As Boulantzas concluded: “Piraeus’ gate and rail services constitute a great alternative and now is the time, even for those who use more traditional routes to get familiar with the Land Sea Express. We present a growth potential, and everyone willing to participate in this journey is welcome”.