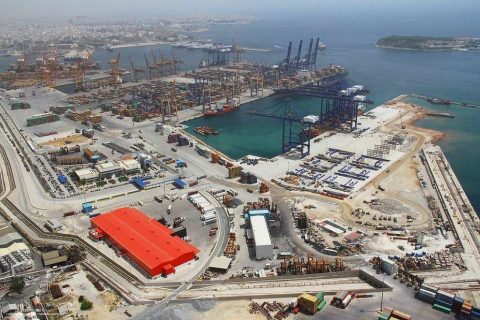 In 2016 the Greek state agreed with Chinese shipping company Cosco it would purchase the majority of Port of Piraeus S.A shares. This agreement sealed the collaboration between the two countries, which began in 2012 when Greece entered China’s BRI and ‘17+1’ initiative. The Mediterranean country sees a lot of potential in the exchange with China and is welcoming it to further expand its business in the country. However, Greece needs to improve its infrastructure. If it wants to acquire a more central role in Eurasian transportation, it needs to turn attention to rail in particular.

This view was expressed in an online conference that took place on 23 November with Greek officials, who voiced their confidence that Greece will have a fair share of foreign investments in the future. Currently, most focus lies on sea transportation, but it would be beneficial to turn attention towards rail as well. The brand new rail service connecting the port of Thessaloniki and the dry port of Sofia is a good way to start.

Greece has been a strong component of European sea transportation over time. With the Port of Piraeus being among the ten biggest ports of Europe and with other busy regional ports the country sees huge volumes transported every year.

The Chinese investment in Piraeus improved its capacities and infrastructure, while it boosted the numbers of transported cargo during the last few years. In July 2020 Thessaloniki Port Authority and the China Merchants Port Holdings signed a similar agreement of cooperation concerning the Container Terminal Operation System of the Greek port. The port of Thessaloniki is the second biggest in Greece and the Chinese aim to use it as an additional gateway for their country to Europe.

With the Greek ports being in the focal point of Chinese companies, it is understandable that they can play a significant role. Nevertheless, there was a preexisting infrastructure that allowed them to grow so rapidly and attract attention. Unfortunately, this does not seem to be the case with Greek railways.

The country has one major rail operator, Trainose, which until 2017 was state-owned. In that year Trainose was sold to the Italian State Railways and its subsidiary Trenitalia. Word said that the transfer of shares would be synonymous with an investment scheme that would improve the overall situation in the rail sector. Unfortunately, until now, there hasn’t been much movement in this direction. There are still fundamental problems, neglected for decades, that urge to be resolved.

On the other side, it is essential to note down that Greece’s railway network is part of the Orient/East-Med corridor of the TEN-T network. As part of that, it sees many EU oriented investments with the latest one, that took place in July 2020, reaching the amount of 2,2 billion euros. The specific financial boost aimed to reinforce the railway, cross-border links, and connections to ports and airports. For example, some projects that will benefit from the funding budget are the railway section between Alexandroupoli-Pythio, which will be studied for further development, and the construction of a high-speed line between the port of Kavala and Thessaloniki. Both projects will take place in Northern Greece.

Additionally, on 27 November the first train connecting the port of Thessaloniki and the dry port of Sofia made its initial itinerary. The trip which lasted sixteen hours will be the first among several test trips that will take place until mid-January 2021. The route will include weekly roundtrips which will aim to optimise the services between the two cities and improve connectivity in the Balkan peninsula generally. Moreover, according to the CEO of the port of Thessaloniki, Franco Nicola Cupolo, “such a development will contribute notably in improving the competitiveness of the port and the national and southeastern European economy”.

Nevertheless, there is still space for implementing more changes. For instance, apart from effortless connectivity between destinations, Greece lacks something equally fundamental. Freight terminals that facilitate transhipment and multimodal transport are not very easy to find. Currently, the country has only two central terminals in the ports of Piraeus and Thessaloniki respectively.

At the moment, all attention is focused towards the Thriasio multimodal freight station in Athens that is estimated to upgrade rail freight services significantly. The project will be complete in 2021. Simultaneously, there are hopes for a corresponding investment in Thessaloniki, with nothing being certain yet. Thanos Mavros, Advisor at Ernst & Young, commented that “if the Thriasio freight station begins operating and if the freight centre plans for Thessaloniki get realised, then Greece will start attracting even more attention in the next four years”.

In overall, Greece has the potential and the needed investments to become a crossroad for southeastern European transport and Eurasian traffic. Besides focusing on the sea part of transportation, though, Greek officials should also pay attention to rail and utilise funds in the maximum to improve infrastructure and services. Bold developments in rail could certainly boost the country’s role and unlock all the possibilities that it has to become a transport gateway for Europe.