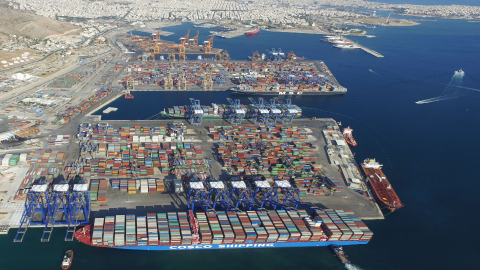 More rail freight through Greece: is it feasible?

Could Greece become a rail freight gateway for intercontinental traffic to and from Europe? Some rail freight companies prove that this could be the case, while the industry still sees some obstacles.

Greece is home to one of Europe’s largest ports in terms of volume handling. With an annual turnover of more than 6 million TEUs, Piraeus is considered a trade bridge between Europe and Asia. The Cosco Shipping owned port is growing rapidly and transforming into a Eurasian transport gateway. Many electronics corporate giants choose it as an entry point for Europe and a logistics centre for warehousing and distribution to Europe, the Middle East, and Africa.

The port is positioned in an ideal location. It is very close to the Suez canal and functions as an east-west crossroad. Additionally, it connects with all base ports of China with mother and feeder vessels. Are all these enough, though, to make Greece a more active rail freight player with more connections to inland Europe?

Companies that make it happen

Some examples are proving that connecting Greece with inland Europe is feasible and valuable. For instance, Rail cargo Group acknowledges that the port of Piraeus and its connection to the international railway network is decisive for the forwarding and rail sector in southeastern Europe. Greece is part of RCG’s TransFER network, and the company has established a joint venture in the country with the logistics provider Goldair Cargo since 2018.

RCG aims to become a leading rail logistics provider in Greece, and so far, its services include single wagons, wagon groups and block trains to and from Greece. In 2019, the Austria based company carried 26,800 TEUs between Piraeus and inland Europe.

On the other hand, a smaller but competitive company narrates a success story involving rail freight through Greece. Ocean Rail Logistics, based in Piraeus, connects the Far East with the Balkans and central Europe. With the Land Sea Express service, this company travels through Greece, North Macedonia and Serbia, to reach Hungary, Slovakia, Austria and the Czech Republic. It transports imported cargo from China and other Far East countries. On its return from Central Europe, the train transports European products, which are then loaded on feeder vessels to travel to China.

Its trains reach central Europe full. However, on their way back, they are loaded at least by 80 per cent since export demand towards China is also high. In fact, the Greek company, which is Cosco’s subsidiary, observes that as maritime shipping volumes towards Piraeus grow, so does the demand for more trains. Then why don’t we see more companies launching rail connections to Greece?

So far, it seems that Greece has the volume potential to become a rail freight destination. The fact that a company like Rail Cargo Group supports this view is not coincidental. Its maritime connections allow for the transhipment of cargo on rail and its further distribution in mainland Europe. Nevertheless, the country lacks a fundamental thing: consistent rail freight infrastructure. 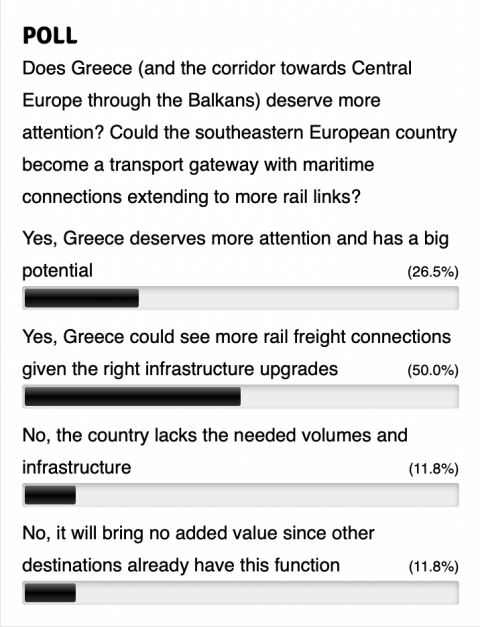 Freight terminals that facilitate transhipment and multimodal transport are not very easy to find in Greece. Currently, the country has only two central terminals in the ports of Piraeus and Thessaloniki, respectively. At the moment, all attention is focused on the Thriasio multimodal freight station in Athens, estimated to upgrade rail freight services significantly. The project will be complete in 2021.

Moreover, full electrification in the country’s main routes is still not in place. For instance, Ocean rail currently lobbies to electrify the rail section between the Ikonio terminal in Piraeus and Idomeni border crossing with North Macedonia. The same applies to the route between Thessaloniki and Kulata border crossing with Bulgaria. Upgrading the infrastructure would firstly facilitate rail freight transport through Greece, reduce CO2 footprint, and increase the tonnage of trains.

What do you think about Greece and its potential for more rail freight connections? Should companies pay more attention to it? Let us know in the comments below the article. In addition, if you know any rail services to and from the Balkans and Greece, share them with us!

2 comments op “More rail freight through Greece: is it feasible?”

Ukraine, East Turkey, Armenia, Georgia and Azerbaijan are next.