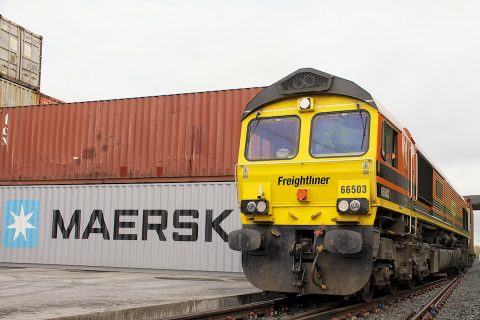 Never mind the football. The trophy winner this week is Tinsley, the marshalling yard shared between the neighbouring English cities of Sheffield and Rotherham. Derelict for decades, the former marshalling yard has seen a recent rebirth and resurgence of traffic. Logistics specialist Newell and Wright, then operator GB Railfreight have been followed by Freightliner in netting new traffic for the north of England terminal.

Freightliner, the UK arm of multinational operator Genesee and Wyoming Inc., has added to the resurgence of Tinsley Marshalling Yard. The rail freight company has netted a daily intermodal rail service from the Port of Felixstowe, the busiest intermodal port in the UK. The latest move has added to the goal of re-establishing Tinsley as a premier freight terminal for the north of England.

Opened in 1965, just before England won the World Cup, Tinsley Yard large under-performed throughout its life, and was soon relegated to the list of redundant freight infrastructure in the UK. After many decades languishing in the lower league tables of network operations, the yard has recently been, at least in part, promoted back into a winning position. Notably, logistics company Newell and Wright established a base of operations there.

The latest signings have been a front-line partnership between shipping corporation Maersk Line, the Port of Felixstowe, and the busy UK operator Freightliner. In the biggest win yet for the resurgent yard, Freightliner have announced a daily intermodal service between the east of England and the South Yorkshire terminal.

Options available to importers and exporters

Team working alongside their longstanding shipping customer, Maersk Line, and in collaboration with the Port of Felixstowe, Freightliner’s new service has begun operating to the new Newell and Wright site at Tinsley. “We are delighted to see the re-opening of the site at Tinsley, providing a further opportunity to move more goods by rail and the associated environmental benefits that brings,” said managing director of UK Rail at Freightliner Tim Shakerley.

At the origin point of the service, Chris Lewis, the CEO at the Port of Felixstowe, was happy to kick-off the first of the daily trains. “This new service, Freightliner’s twentieth daily service from the port, further extends the range of sustainable distribution options available to importers and exporters through the UK’s largest container port”, he said. Felixstowe itself has been actively seeking further opportunities to expand rail operations. Although the port is among the busiest rail freight locations in the UK, it still sees the majority of goods forwarded by road.

The domination of road-based forwarding is by no means unique to Felixstowe. However, this further step in the direction of rail freight is welcomed by Steve New at Maersk Line.“With decarbonisation high on the agenda, we continue to work closely with Freightliner on initiatives aimed at delivering a reliable and sustainable rail freight solution for our customers”, he said. “Maersk Line is proud of our long-term collaboration with Freightliner, providing rail freight capacity to a range of destinations throughout the UK, including a new service from the Port of Felixstowe to the new Tinsley site operated by Newell & Wright Transport.”

The site at Tinsley is a far cry from the vast layout of the 1960s. However, with rail freight operations much more streamlined than in the past, the potential for freight handling is every bit as promising. GB Railfreight took advantage of that new facility recently. If the UK logistics chain is to achieve the move towards rail-based operations, this is certainly a move up the table. Team work, like the co-operation between Freightliner and their partners, could see places like Tinsley recover as modern-day trophy winners.