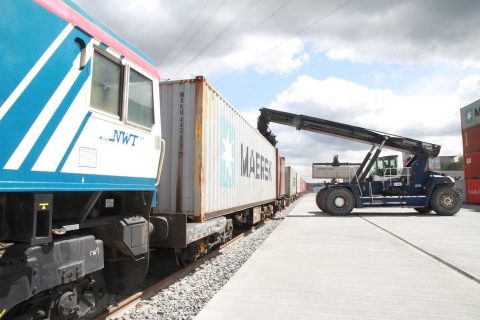 Freight forwarding and logistics operator Newell and Wright is the latest enterprise to take advantage of the potential for the former marshalling yard at Tinsley, which lies on the boundary between the industrial cities of Sheffield and Rotherham. The international operator has reactivated part of the site as a new intermodal terminal, already receiving trains. The announcement follows on from a recent planning application from DB Cargo UK to operate from another part of the site. There is also existing activity from new build warehousing and an overall plan to transform the Sheffield International Rail Freight Terminal (SIRFT) infrastructure.

Newell and Wright say they have been working round the clock to reopen the unused rail terminal at Tinsley, which sits between Rotherham and Sheffield, the two cities synonymous with the UK steel industry. Although requiring only a fraction of the former marshalling yard, the news boosts the rail freight industry and the local economy. Tinsley Marshalling Yard was once the rail hub of the region and served as a maintenance base for over 200 locomotives. However, the decline in wagon-load traffic saw the area become derelict until recent interest in growing intermodal and bulk loads.

After some test movements, the first revenue-earning train was received last week. “We welcomed the first train in the yard from Maersk, after two months of intense manual labour, resurfacing, inserting new rail tracks and working on the roads which enter the site”, says a statement from the company. Looking forward to the first full week of services, operations director Stephen Newell said this was a step towards cutting the company’s carbon footprint and increasing its rail freight services. “It will also reduce the distance our trucks have to travel and provide more rail freight options for businesses.”

The company is already well known within the rail freight sector but is most prominent for its road fleet. That is something the company founder Frank Newell wants to address.“This is just the start of a huge investment into rail freight”, he said. “We plan to start phase 2 of the development, increasing capacity and job opportunities in the area. The government has have asked businesses to reduce emissions, reduce traffic and make changes to support environmental initiatives, and that’s exactly what we have done.”

The terminal is positioned to serve all the main UK ports, but it comes as no surprise that the first working was from Felixstowe, the biggest intermodal port in the UK. The company says the development will strengthen its relationship with all major shipping lines and large distribution centres in the region and support the supply chain. Network Rail also recently announced significant infrastructure upgrades in the region, which will better connect Sheffield with Manchester and the west of the UK.

Acknowledging the site’s industrial heritage, Newell and Wright have said they will keep some of the original installations around the site to pay respect to the site history and past workers. Tinsley Yard was part of a vast reorganisation of the UK rail freight industry in the 1960s, but it proved something of a white elephant, as the traffic for which it was designed never fully materialised. Tinsley may not be the hive of round-the-clock activity it once was, but its future as a part of the rail freight future seems secure.