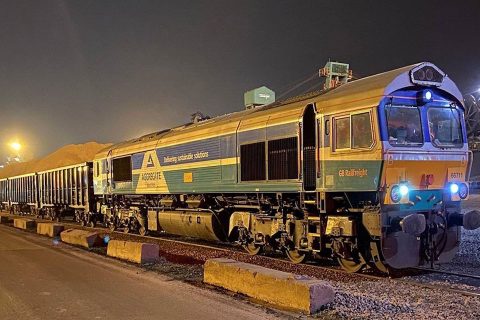 GB Railfreight has announced another new flow, bringing back into productive life two underused facilities. On behalf of Aggregate Industries UK, the carrier has commenced a fortnightly operation from Redcar- a seaside town once dependent on steel manufacture – to Tinsley in South Yorkshire.

The destination in Tinsley is on a former general marshalling yard site, which was built in the 1960s for general cargo, but never lived up to traffic expectations. New intermodal operations recently shattered from the site and brought redundant infrastructure back into modern-day productivity. The rail infrastructure at Redcar lends itself to bulk operations.

The steelworks at Redcar have fallen silent, and the ovens have long since been extinguished. Still, the dock terminal has been repurposed as Redcar Bulk Terminal, providing the town with alternative industry. Nearby Scunthorpe is still an active steel town, but due to the continued growth in the UK construction industry, there is plenty of demand for heavy haulage from Redcar.

Aggregate Industries UK is the latest to take advantage. According to posts from GB Railfreight, the company has contracted GBRf to service a new fortnightly flow, moving product from Redcar to Tinsley in Sheffield. The former marshalling yard was established in the early 1960s as part of a modernisation plan for British Rail. However, the wagonload freight for which it was designed declined sharply soon after commissioning, and the site has fallen into disuse over the years.

However, just last month, logistics specialists Newell and Wright inaugurated an intermodal service from Tinsley. There are ambitions to use part of the site to expand the embryonic Sheffield International Rail Freight Terminal (SIRFT).