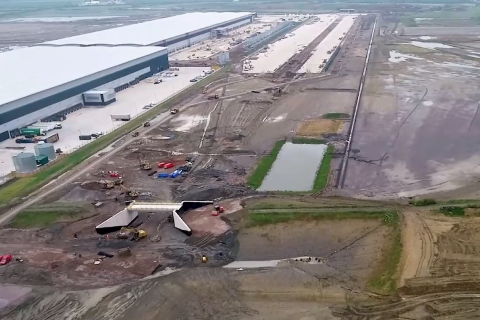 Britain’s biggest inland intermodal terminal is swiftly moving to the largest stage of its development. Daventry International Rail Freight Terminal (DIRFT) is in the middle of its third phase, which will see the terminal move up to a handling capacity of 32 trains per day. In modern intermodal terms that will make DIRFT the largest rail freight terminal in the UK, handling around twice as many trains daily as any rival facility.

Often touted as the exemplar for modern rail freight handling, Daventry International Rail Freight Terminal is currently undergoing the third and final planned stage of development. The site, in the English Midlands, is on course to be the biggest inland rail freight terminal in the UK. Operations at the site have been underway since 1997, and the new third phase is due to go live later this year.

Speaking to an invited audience at the Rail Freight Group, David Mellor, project management director in the West Midlands for Prologis, predicted that the success of DIRFT will continue. He said it will be emulated by other intermodal terminals around the UK.

That is no idle prediction from Mellor. His company already has under its management around 100 million square metres of warehousing worldwide. That means around 2.5 per cent of all the world’s traded goods pass through a Prologis facility, which gives them a unique insight into world trade trends. The investment in DIRFT is not undertaken without a considerable body of market intelligence informing the decision.

Fifteen per cent of warehousing

The percentage of intermodal traffic conveyed by rail in the UK is still a relatively small number. Industry sources say that will not change significantly unless there is a radical upswing in rail-accessible provision. As it stands, even if all the planned and proposed ‘Strategic Rail Freight Interchanges’ come on line and are fully utilised, the total share of warehouse floorspace directly accessible by rail will still only be around fifteen per cent of total provision. While every indicator points to increased global intermodal activity, rail freight has plenty of opportunity to grow, if the logistics sector joins the party.

The original 1990s development at DIRFT was already impressively big – certainly by UK standards. At over 400,000 square metres, it would not be out of place on the global stage. Add to that a similar-sized DIRFT II, and already the site had capacity for something like 16 trains a day. Now DIRFT III will approximately double the site by every measure.

The efficiency of operations means that, like every other rail head on the freight network, infrastructure utilisation is very high, and there’s no need for expansive marshalling facilities. That said, the developers have made the best use of available land. “We’re installing a traverser, so there’s no need for a large fan at the end of the tracks”, says Mellor. That means the sidings are easily accessed along their entire 800m length, allowing something of a margin, even for the aspired network maximum of 775m all-in length.

DIRFT lies within the Daventry parliamentary constituency of Chris Heaton-Harris, who just happens to be the current rail minister in the UK government. That though has not absolved DIRFT from the rigorous planning process.

Heaton-Harris is well known for his interest in rail freight matters but, like his parliamentary colleagues, is aware of the constraints on the network. That point was noted by Guy Banks, head of Network Rail’s freight development team. The pandemic-induced reduction in passenger traffic has been a boon to his department. “A quieter network allows us to run longer trains without constantly being looped behinds stopping passenger trains.”

With DIRFT directly adjacent to the West Coast Main Line, the busiest mixed-traffic route in Europe, finding paths for those additional trains will be a headache. However, with the stars aligning – in the shape of changed passenger traffic profile, and the prospect of HS2-released capacity – the headache may soon be how to accommodate a fully committed DIRFT III, and where next for intermodal rail freight.