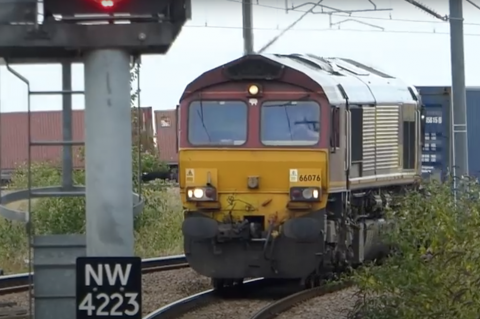 Proposals for a new rail freight terminal within what the industry regards as the ‘Golden Triangle’ of the English Midlands, continue to meet with stiff local opposition. Developers want to build a huge logistics park on a greenfield site, adjacent to a main east-west railway line, which forms part of the strategic freight network, connecting ports with the industrial areas around Birmingham, Nottingham and Sheffield.

The greenfield site, which would form the Hinckley National Rail Freight Interchange (HNRFI), has been identified by the UK government as a Nationally Significant Infrastructure Project (NSIP), which gives it certain advantages when going through the rigorous UK planning application process. However, local opposition, including political activists and conservationists, have expressed concerns about the road traffic potential for the site, which is also adjacent to a major motorway.

Almost one year on from reporting the stalled plan to build this new freight terminal in the Midlands, Hinckley National Rail Freight Interchange is back on the national agenda. According to local newspaper reports, the would-be developers, Tritax Symmetry, have submitted a revised proposal to the Planning Inspectorate, the overall central-government agency for planning approval matters. Local opposition fear their objections are being overlooked. They argue that the status of the proposal, as a designated Nationally Significant Infrastructure Project (NSIP), means the final decision on the development rests outwith the hands of the local authority.

Two other NSIPs have already been approved in the region. The Daventry International Rail Freight Terminal (DIRFT) is already established and expanding for its third phase. Not far away, East Midlands Gateway Rail Freight Interchange was also granted development permission, and has proved successful, with the intermodal rail freight terminal operating round the clock to accommodate up to sixteen freight trains per day.

The developers at Hinkley say that they will install railway sidings and a freight transfer area alongside the two-track railway between Hinckley and Leicester. “This line”, they say, “forms a part of Network Rail’s freight route between Felixstowe and Nuneaton, lengths of which have been the subject of upgrades, and is also well-placed in the national rail network to provide direct links to and from major cargo terminals at Southampton, Liverpool and the Humber estuary.”

However, the connections with Felixstowe, which would generate traffic for HNRFI, are running at capacity in parts, and still need some upgrading. In general, east-west connections in the UK are less well developed than north-south routes. “The site is located in what the UK logistics industry regards as the Golden Triangle”, say the developers. “The East Midlands is home to a fifth of the UK’s manufacturing capability and 45 per cent of British rail freight goes through the Midlands. Tritax Symmetry’s plans look to meet the needs of the logistics industry, including port operators, in serving manufacturers, distributors and retailers by capitalising on the site’s locational strengths and connectivity to the railway and motorway networks.”

If approved, almost 14 hectares will be provided for the construction of the proposed rail port, say the developers. However, the space for logistics warehousing and road access is much larger. The efficiency of rail freight, in area required to operate, does not convince objectors, who see the loss of a wide area of common land to industrial development.

Despite the status of the project, there is no expectation of an early decision. The Secretary of State for Housing, Communities and Local Government, Robert Jenrick, who represents a Midlands constituency in the UK parliament, will ultimately approve or deny the project, and that process could take another year. Jenrick is also the ‘champion’ of the Midlands Engine initiative to stimulate economic growth in the area.

The proposals have divided opinion locally. The area is open land and has some significance to archeologists, who note that this part of England was at the heart of the Civil War in the seventeenth century. Over four hundred years later, it seems divisions in the area still run deep, and may yet be a battle.