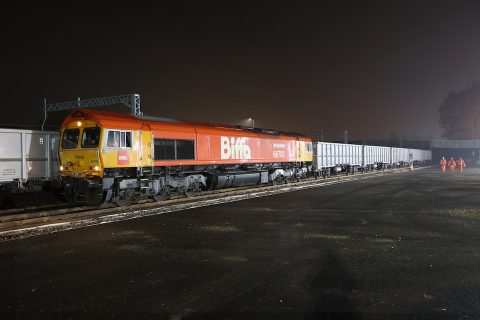 Rail freight operator GBRf, and their Industrail waste management partners Biffa have joined forces to clean up the capital. The two companies have collaborated on an operation to turn derelict land into an emission-reducing transport hub. The site will help reduce the carbon footprint of waste management in the city and help make more efficient use of materials that would previously have gone to landfill.

An unused brownfield site in the east of London has been transformed into a transport hub, linking key waste sites around the capital. Waste management specialists Biffa, known around the country for commercial and contract waste handling, has teamed up with GB Railfreight (GBRf) to establish a new rail-served facility in the borough of Barking. The Renwick Road location, which became operational last week, will be able to transport 250,000 tonnes of waste from London by rail.

Transporting waste by rail is a key strategic aim for Biffa. The company is working towards transporting half of all its waste by rail by 2025. The Renwick Road collaboration represents the latest development of a strategic partnership with GBRf, which has been in place since 2018. In that time, over a million tonnes of waste has been transported by rail. According to the partners, that’s saved more than one million tonnes of CO2 equivalent emissions from reaching the atmosphere.

“The opening of our new rail hub marks the next step in our strategic partnership with GBRf to increase our capacity for transportation by rail”, said Mick Davis, the chief operating officer for the resources and energy division at Biffa. “It will help us reduce dependence on vehicles on the road and reduce the emissions we produce.”

Although the site has been derelict for some time, it is not without history. The East End of London, where once stood the docks of the original Port of London, was repeatedly targeted in World War Two. The rail infrastructure in the area was of strategic importance. In the London Blitz, the area was continuously bombed for 76 days during the winter of 1940-41. The docks, industry and rail infrastructure in the area was heavily defended. Evidence of that came to light during the construction phase. “The site was totally derelict when we took it on”, said Davis. “Amongst the rubbish and debris we cleared, we actually found some interesting items, including one and a half tonnes of World War Two bullets.”

Looking to give the area a shot in the arm, rather than a burst of anti-aircraft fire, John Smith, the managing director at GBRf, said he was delighted to be working with Biffa on this project. “Our collaboration will see us move thousands of tonnes of waste sustainably. This is the way forward if we are to reach the net-zero carbon emission target by 2050, and we look forward to continuing our partnership with Biffa in the months and years to come to ensure more waste can be removed by rail.”

Investment in the neighbourhood

Biffa has spent 4.2 million GBP (4.7 million euros) developing the site, removing 14,000 tonnes of previously fly-tipped waste and debris. Historically, Renwick Road has always been a railway yard, with its earliest record dating back to 1864. It fell out of use in 1991 and has remained so until now. Operating five trains a week, Renwick Road will transport waste from North and East London to sites at Roxby, Scunthorpe, Leeds and Manchester – all in the north of England.

Barking is a hive of railway activity at present. Setting aside last year’s derailment, which damaged existing infrastructure, the is plenty of positive news from the area. DB Cargo recently announced plans for a customs clearing hub nearby, and an extension of the London Overground network is underway to serve the large Riverside residential and commercial development. Increased freight traffic is also being generated through the area by the expansion of nearby Tilbury – the docks that superseded the port in this neighbourhood.