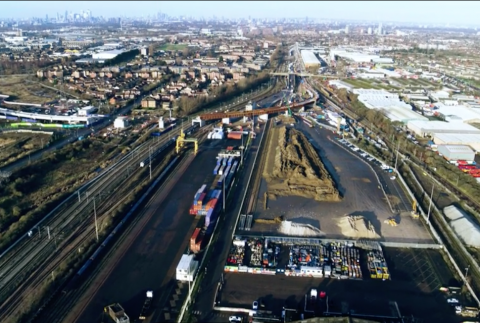 DB Cargo to get Brexit beating customs terminal in London

UK government funding will allow DB Cargo UK to set up a dedicated customs approval area within their terminal at Barking in the east of London. The rail freight operator has successfully bid for funding from the UK Port Infrastructure Fund. The award of 470,000 GBP (520,000 euros) will fund the establishment of a secure facility to fulfil international trade administration and inspection requirements.

DB Cargo UK has successfully bid for funding to create a new ‘Customs Approval Area’ at its intermodal terminal at Barking in London. Funding for the project comes from the 200 million GBP (222 million euros) Port Infrastructure Fund. The fund was launched in October 2020 to enable maritime ports, airports and international rail termini, currently handling goods imported from the EU, to better cope with the post-Brexit trade requirements.

International traders have faced dramatically increased administrative overheads since the UK left the European Union. In many cases, consignments have been delayed by unfamiliar checks and bureaucracy. Further approvals will be required from the end of this year, twelve months after Brexit came into force.

The establishment of customs approval areas is designed to minimise disruption, and ensure goods move swiftly into and out of the UK. The funding secured by DB Cargo UK will allow the operator to build the necessary infrastructure and facilities to enable customs and sanitary and phytosanitary checks to be carried out at ports following the end of the transition period.

The Barking intermodal terminal already handles a significant fraction of the UK’s international trade goods. With funding in place, work is due to begin shortly to build a new inland border control facility at the site. This will speed up the movement of goods into and out of the country following the end of the Brexit transition period.

The investment will fund the construction of a new warehouse, where Border Control staff will be able to conduct inspections. Containers can be loaded and unloaded for onward travel within the new terminal. It will also include a new secure storage area to hold any confiscated or seized goods. The plans include additional site security, office and welfare facilities for Her Majesty’s Revenue and Customs (HMRC) officers.

Refrigerated rail freight to the rescue

“Barking is already a key staging post between the UK and Europe”, says Andrea Rossi, the recently appointed chief executive officer for DB Cargo UK. “Barking plays an important role in the import and export of materials, consumer goods and produce for use both home and abroad.”

Many British and European traders have expressed concerns about delayed consignments. The post-Brexit administrative hurdles are proving a huge headache. Some manufacturers and producers have pulled out of cross-channel trade altogether. Others however are turning to rail freight as a reliable way to get to their markets on the continent and the UK. Food producers in particular have been worried over delays to transit-time critical deliveries.

“Every week train-loads of refrigerated containers pass through the terminal en-route to supermarket shelves up and down the country”, added Rossi. “This latest investment will ensure Barking continues to play a significant role in the seamless transportation of goods to and from Europe.”