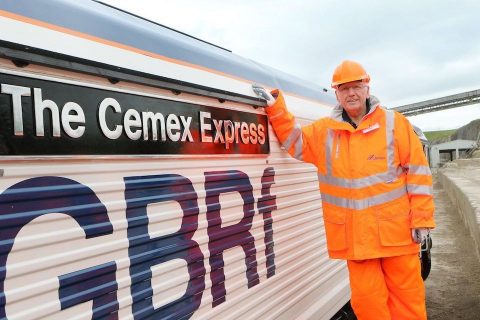 Rail freight facilities have been improved and safeguarded for future expansion at the Selby distribution hub operated by Cemex, the global building materials solutions supplier. Infrastructure renewals will mean aggregates can continue to be moved by rail, for onward distribution across the north of England. The company’s move suggests confidence in further growth in the aggregates segment of the market, anticipated economic and infrastructure activity in the region, and faith in rail for handling bulk materials.

Cemex, along with business partners, has invested over 200,000 GBP (220,000 euros) in an upgrade of its rail facilities at Selby in Yorkshire. The works, which included track renewals, are part of a wider revamp of the site, which the company says is critical to its operations in the north of England. They describe the works as a strategic investment for the growth of its Selby Asphalt Plant and Depot to enhance its overall operation efficiency. The company anticipates running more trains to the site over the renewed connection.

Increase the number of trains

Cemex operations are an important part of the industrial economy of the former mining community of Selby. Together with Bowker, its logistics partner at Selby, and the business park owner and operator, Potter Space, the investment in new rail freight infrastructure and facilities helps to secure the operational future and enhance employment projects at the site. The intention, say Cemex, is to ensure the ongoing reliability of the service from this site, and increase the number of trains that can run each week.

Improvements have been made to the track spur off the former East Coast Main Line, into the Selby depot. “Around seventy per cent of the track has been completely replaced, with other upgrades such as concrete sleepers made to enhance the condition of the track further, along with installation of new loading bays”, said a company spokesperson. The line serving the depot still carries local mixed traffic, but the main line was diverted away to a new alignment in 1983, when coal mining operations threatened the stability of the ground. Mining operations, like all deep coal mining in the UK has since ceased.

Logistics partner Bowker has also made significant investment in its stone discharge facilities at Selby. Together with the managers of the industrial park – Potter Space – The new terminal has upgrading safety features to go beyond legislative requirements, and improved reliability. “The improvements will deliver reductions in down time during critical discharge periods”, said Neil Bowker, the company’s commercial director. “The investment demonstrates the commitment Bowker have made to the partnership.”

The commitment is also to rail freight. The works will increase the number of rail services run from this depot to three a week. This means an extra 90,000 tonnes of material can be moved by train, at a time of critical examination of heavy goods road traffic and environmental impact. While increased bulk rail deliveries does suggest a corresponding increase in off loading to local trucks, emphasis is made of the overall road mileage avoided.

Growth in the aggregates sector

Cemex has a track record of recent investment in its British rail operations. Dave Hart, the Cemex supply chain director for UK and France, said that was a policy they intended to continue. “This allows us to grow volumes and increase the services we offer”, he said. “The works at Selby were the latest part of our development programme and it was fantastic to partner with Bowker and Potter Space on the many improvements that have been made. Enhancing the sustainability of our business is a key priority and the use of rail forms an important part of this. Every rail freight service removes trucks from the road and achieves additional carbon savings.”

Growth in the aggregates sector is seen as the second most important business area for UK rail freight. Only intermodal traffic accounts for more business. Bulk operations within the former coal mining area of Yorkshire help to replace some of the lost coal traffic that once dominated operations in the area. The vast Selby coalfield was abandoned in 2004, after just twenty years of operation. Some other rail facilities associated with the mine have been repurposed. The former treatment and loading facility at nearby Gascoigne Wood, for example, has been refurbished as secure stabling for rolling stock.