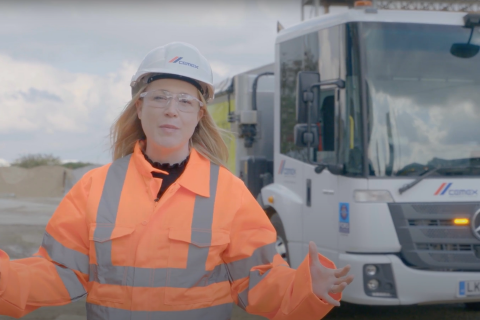 The UK arm of concrete, cement and aggregates specialist Cemex has moved over two million tonnes of materials by rail in 2020, and still has a month to go. Despite the pandemic slowdown, the company says it has managed to save over 100,000 road movements. The building materials sector has been applauded for assisting the economic recovery in the UK, and operators have all been keen to display their environmental credentials. On average, according to company figures, Cemex has been running over 100 trains a month, averaging almost 1700 tonnes each.

As well as moving its products around the UK, Cemex has been investing in its rail infrastructure. The company has put over 600,000 British pounds (660,000 euros) into rail facilities at six locations, including their principal quarry and aggregates site at Dove Holes in Derbyshire, which would otherwise generate a significant proportion of the 100,000 saved road truck journeys. That, says the company, has kept 12,500 tonnes of CO2 out of the atmospheric chain. The tonnage moved already has exceeded its rail operations record, set in 2019.

Breaking the right sort of records in this pandemic year has been a source of some justifiable pride for David Hart, the company’s supply chain director for the UK and France. “Improving the sustainability of its business is one of Cemex’s key global priorities”, he said. “The supply chain plays an integral role in this. Investing over 600,000 pounds into our rail network this year has enabled us to increase efficiency across our operations and in turn grow the amount of transportation that can be delivered by rail, presenting considerable benefits to both the environment and our customers.”

Hart said that collaboration had been a key element in the record-breaking rail freight year. “This achievement would not have been possible without the commitment and dedication of our teams. Despite the many challenges posed by the Coronavirus pandemic, our rail depots have all remained open throughout the year and we want to take this opportunity to thank our employees, who are a key part of the business’s success”, he said.

The two million tonnes moved was completed over 1200 journeys, the majority of which saw aggregates taken from Dove Holes Quarry in Buxton, Derbyshire, to locations across the UK. Rail operations were affected by the recent derailment at Sheffield, when an outbound cement train came off the rails in the city’s passenger station.

The UK is currently experiencing a building boom, led by projects in the South East and London. The geology of the British Isles is such that raw materials for building tend to be found in the South West and North West of England, which is good news for rail freight companies willing to move aggregates in bulk. Cemex has committed to rail in no small measure, and has also been well placed to take advantage of the booming market locally, around Manchester.

Rail an integral part of investment

Investment has paid off for Cemex too, says Hart. “As a result, we have been able to grow volumes and make our service more reliable, which in turn has halved our unplanned outage costs and incidents”, he said. “These developments will also ensure our railheads lead the industry for safety standards and are more robust. Rail is an integral part of Cemex UK’s supply chain network and we are committed to increasing our service further, capitalising on the time, capacity and efficiency benefits this form of transport offers.”

Cemex has also been putting faith in its own products, in order to get loads around the UK. The company is a major supplier to Network Rail a basic but vital railway component: concrete sleepers.