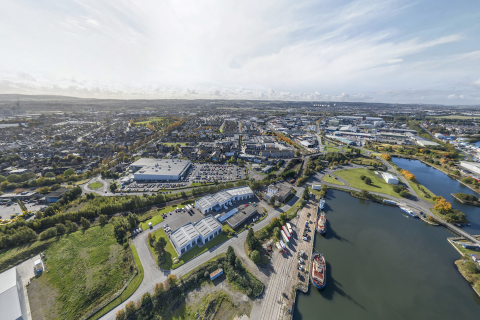 The Port of Grangemouth has commissioned its new three million pound (3.3 million euros) rail freight hub. The works, which modernised and expanded an existing but limited facility, has created twin sidings, capable of handling the longest freight trains in the UK. The first working to the new hub was a domestic intermodal flow from Aberdeen, operated by Direct Rail Services.

Forth Ports, who operate several maritime facilities around the UK, including Tilbury in London, have welcomed the completion of capital works at Grangemouth, Scotland’s largest container port. The facilities, previously restricted to 200m lengths, can now accommodate the longest designated trains operating in the UK, at 775m.

Grangemouth, on the River Forth, upstream from Edinburgh, has an extensive rail heritage, serving heavy industry in the area, and the more recent traffic generated by offshore industries and the adjacent oil refinery. The port handles in excess of 155,000 containers per annum, and more than £6 billion worth of goods passes through Grangemouth each year including steel plate, timber, paper and equipment for the oil and gas industry.

There are several other rail freight hubs in West Central Scotland, with more capacity in the pipeline, notably at Mossend less than 20 miles (32km) away. The operators at Grangemouth have invested to bring the port rail facilities up to date in that increasingly competitive market. A modestly loaded inaugural service, operated by Direct Rail Services, arrived on a domestic intermodal run from Aberdeen, to christen the new facilities.

Forth Ports say that the new facilities will be of particular benefit for customers in the food, drink and perishables sectors across the Scottish freight community. “The opening of our new freight rail hub comes at an important time for the freight market as businesses are seeking flexible, resilient, and greener supply chain solutions”, said Derek Knox, the senior port manager at Grangemouth. “We have the unrivalled position of being truly interconnected for sea to rail and rail to sea, with the added flexibility of direct road access into Central Scotland and beyond. We have invested over £30million in infrastructure and equipment over the past five years at the port and this new rail offering combined with our established port operations and streamlined customs processes creates a unique solution for our existing and future customers.”

Forth Ports operates a network of maritime facilities around the UK, most prominently at Tilbury on the River Thames in London. However, the company’s portfolio includes the port of Dundee on the east coast of Scotland, and five other ports on the River Forth. Grangemouth has frequent intermodal sailings to Rotterdam, Antwerp, Hamburg, and around the UK coast to Felixstowe.

Rail operations at Grangemouth are expected to grow significantly. The new facility is backed by on-site distribution warehousing, and is within a few miles of the main supermarket distribution centres within Central Scotland. Grangemouth has a regular rail link with its sister port in Tilbury on the Thames with a connection through Daventry in the English Midlands.

“This investment demonstrates the vital role rail freight plays in our economy and its importance in ensuring goods reach supermarkets quickly and reliably”, said Chris Connelly, of Direct Rail Services, the operator who brought the first train into the new tracks. “This new siding will allow even longer, heavier trains, further increasing their environmental credentials and meaning fewer lorries on our roads.”