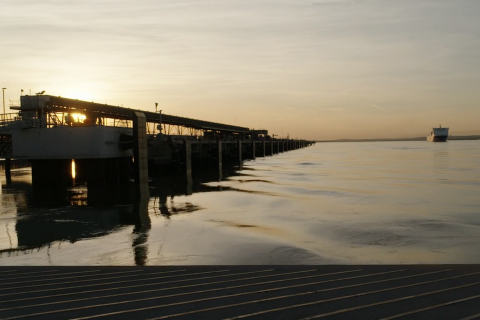 Tilbury, the expanding port on the north bank of the River Thames, is advancing plans to double handling capacity, with a new rail terminal embedded at the heart of the project.

The owners of Tilbury, the dock complex on former power station industrial land down stream from London, have successfully tested and opened a new facility for unaccompanied freight. There is handling right now for intermodal containers transported by ferry into the UK without truck drivers, and brand new rail connections are coming. Rail operators are being encouraged to take note now.

The new terminal is part of a 250 million British pounds (280 million Euro) investment by the owners, Forth Ports. The entire project, named Tilbury2, is adjacent to an existing facility, and will allow for a doubling of handling capacity. Much of that tonnage is expected to be moved on from a modernised rail connection into the port.

The first phase of the project has opened, with a new berth on the River Thames, and the trial run completed with P&O Ferries, who operate a regular scheduled mixed traffic service between there and Zeebrugge in Belgium.

“Our new freight terminal is the country’s most modern ferry port offering a seamless and lower carbon route to the biggest consumer market in Europe, Greater London”, said Charles Hammond, group chief executive of Forth Ports. “Despite the current challenges we have delivered a resilient terminal with significant headroom to grow as we pursue our vision of being the nation’s strategic freight gateway to-and-from Europe. We believe that this terminal opening is a symbol of hope for economic recovery.”

Although the initial phase emphasises road connections and local markets, Tilbury2 is encouraging rail freight operators to look at the ambitions for the project. Crucial to them is what the owners call a strategic rail terminal which can accommodate the longest standard sanctioned freight trains of 775m.

Intermodal, bulk, and cars too

The new rail facilities, around which access is being built, will serve not only the new ferry berth, but also container storage yards and a bulk construction materials and aggregate terminal. The CMAT is expected to contribute a significant part of the projected doubling of cargo volume across the quay – from 16 million to 32 million tonnes annually.

Car handling facilities are included in the plans as well, which will have caught the attention of Ford, who operate an import facility a short distance upstream at Barking. Among the wider economic benefits, Forth Ports also project significant increases in employment in the area, up from the 3,500 to 12,000 jobs supported.

Paul Dale, the asset and site director at the Port of Tilbury, said the new river berth, an integral part of the expansion project, provides significant growth opportunities for the port, and their ferry partner. “P&O can bring in larger vessels, deliver faster vessel turnaround times”, he said. “It also provides a critical low carbon delivery alternative through our new rail connection.”

The development, which was given the go-ahead last year, is seen s good news by the agency responsible for river commerce. “It’s fantastic to see Tilbury2 ferry terminal completed and operational”, said Robin Mortimer, chief executive of the Port of London Authority. “Forth Ports’ investment in its Thames operations is creating the sustainable, resilient operations on which the country depends. Tilbury2 is set to play a key role from day one and is a major growth opportunity for the future.”

Tilbury already claims top be the UK’s fourth busiest container port, but aims to be an even more important multi-modal and mixed freight hub. When fully operational later this year, Tilbury2 will be the UK’s largest unaccompanied freight ferry port, and the country’s biggest construction processing hub.

In a modern interpretation of a long-standing tradition of commerce on the River Thames, the existing jetty on the river will be lengthened to accommodate three vessels simultaneously, and facilitate the onward transportation of goods into London by barge.