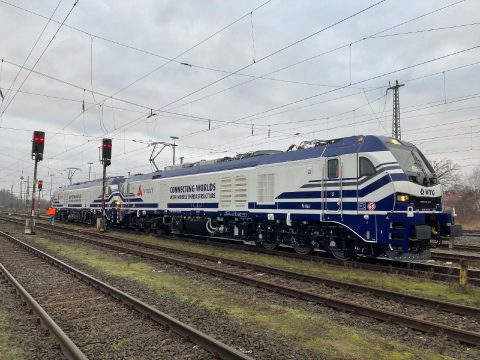 VTG Rail Logistics and its RU subsidiary Retrack will start official operations with two EuroDual locomotives. European Loc Pool (ELP) leases the locomotives, which operate on hybrid mode, using electricity and diesel fuel. The two locomotives named ‘Lena’ and ‘Nina’ went through a successful test period during the first week of February. The testing included static acceptance and inspection as well as a trip. After that stage, VTG is ready to use the hybrid locomotives in its operations.

ELP focuses on six-axle hybrid locomotives that produce power up to 2,8 megawatts when using diesel and 9 megawatts when running on electricity. They are all equipped with the latest ETCS technology (baseline 3 level 2). EuroDuals have already been operating in the German railway network since April 2020, while they will also expand in other countries using European corridors. In addition to them, ELP will start circulating a newer version of hybrid locomotives, the Euro9000, by the end 0f 2022.

‘Lena’ and ‘Nina’, have a power output of 2,8 megawatts in diesel mode and 6 megawatts in electric mode. They are perfectly fit to use in heavy freight train services since they have advanced performances, which they owe to a combination of high tractive force and optimised energy consumption.

Concerning Retrack’s operations, the characteristics mentioned above will translate to an increase of up to 30 per cent of tonnages in European routes. Additionally, the hybrid mode of the locomotives that use two different sources of power can also contribute to the reduction of CO2 emissions.