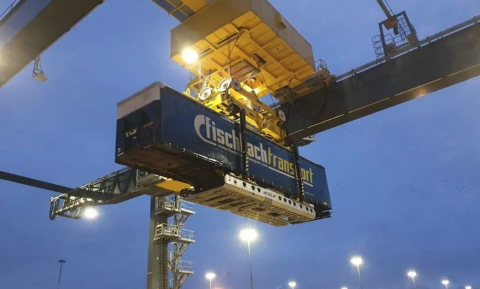 VTG and VEGA strengthen their partnership and set new goals for the roadraiLink (r2L) technology, moving forward from the test phase to its actual use. They aim to employ the r2L transport and handling system more intensely and in conjunction with VTG’s double pocket wagons fleet. Additionally, they estimate that the conditions are optimal for the system to roll out on a European level and develop jointly with operators, railway undertakings and the trailer sector.

The r2L system handles non-cranable semitrailers in the same way as cranable ones. Specifically, the concept uses a galvanised metal plate. Trailers are placed on this metal plate which then can be lifted by a crane. It is a vertical technology which differentiates from other similar ones because it does not require a loading ramp. The cargo handling can take place right in front of the wagon, and with a loading time between five and eight minutes per semi-trailer, it is equally efficient with standard loading techniques.

“One of our main goals is to advance intermodal transport further”, said Jakob Öhrström, Managing Director and Head of the Intermodal Center of Competence at VTG Rail Europe GmbH. Using cranes to lift and load, what were so far, non-cranable semi-trailers means that it is now possible to move more volumes from road to rail.

The technology is suitable for use in more than 90 per cent of European terminals, while its expansion to double pocket wagons provides intermodal solutions with no gaps. Moreover, it constitutes an easy to use system that does not lack precision. Due to the laser distance measuring technology that it uses, human involvement in loading processes is reduced compared to other handling systems.

The VEGA-VTG solution seems to have conquered the Netherlands. In June last year, GVT Intermodal successfully deployed sixteen units to be placed in Tilburg, in the south of the Netherlands. Additionally, in late January 2021, the Port of Rotterdam became the second major Dutch terminal to use the vertical loading technology. Both destinations conducted test transport trips to and from the city of Rzepin in Poland.

However, as Rene Abel, Head of Corporate Communications at VTG, commented, “we are now in full operational mode, and our transport and cargo handling technology is available to all customers and parties concerned”. Undoubtedly, the intermodal sector is looking forward to implementing this solution which will probably impact its operations directly and positively.