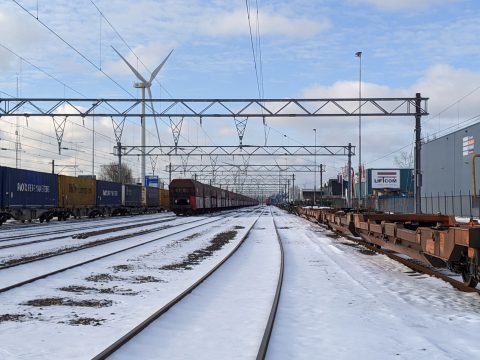 On Tuesday 9 February the first freight trains were able to depart from the Netherlands to Germany, after two days of complete standstill. It was only a beginning; the majority of the train services planned remain cancelled. This is true for all of the Netherlands and North-West Germany.

“Bit by bit, trains are starting to move from the emplacement yards in the Netherlands”, wrote infrastructure manager ProRail on its live blog after 5pm. This was after a day of snow removal from the tracks in the port of Rotterdam and Kijfhoek, a task carried out in cooperation with the rail contractors and railway undertakings. Although there are still many tracks and switches to be cleared, the work has had an effect.

“DB Cargo the Netherlands has started to resume its train service, which had been stopped since last Saturday due to a combination of strong wind, snow and severe frost”, wrote the German operator late Tuesday afternoon. A spokesperson explained that a train was on the way to Germany, carrying the crucial commodity ore.

Unfortunate is the fact that two of Europe’s most crucial ports – Rotterdam and Hamburg – are temporarily paralysed. “Trains from the (German) seaports will not be opened for departure due to snow drifts, icy switches and overhead lines as well as blocked routes in the Kassel, Göttingen, Fulda, Eichelberg area” announced ERS Railways on Tuesday morning.

What is also unfortunate, is that train traffic between the Netherlands and Germany is among the most voluminous in West-Europe, and understandably, the damage is great. “This snow and its consequences show once again how essential our rail freight transport is. Without rail freight, factories will not be supplied and they will shut down. For example, there is a hospital in Germany that is waiting for coal. Without that coal they are literally out in the cold. But also think of the steel factories that shut down if the trains do not start running again soon”, says Pieter Hazejager, country manager at Captrain.

“The problem is that we need both ends of such train services to be available. We can prepare a train for departure in the Netherlands, but if it is not possible to receive this train in Germany, it is not wise to depart. Trains will get stranded on the way. Therefore, we aim for a more controlled resumption of train services, carefully coordinating this with our German counterparts”, explains a spokesperson of DB Cargo the Netherlands on Tuesday afternoon.

Although the several train departures are good news, the restrictions and limitations are still the norm in both countries. “The north-south axis can only be used to a limited extent for rail freight traffic at least until this evening”, writes EUROGATE Intermodal on Tuesday from Hamburg. “Trains in the greater area had to be parked and train departures are refused in the seaports and/or inland terminals.”

In the Netherlands, there is still a lot of work to be done on several emplacements of the port of Rotterdam, Kijfhoek, and on the Betuwe Line, the freight dedicated corridor to Germany. Contractor VolkerRail is currently solving the many disruptions on this 160-kilometers long line. “In Germany, too, there is snow nuisance on the track, so even when that job is done, an unobstructed route is no guarantee”, says ProRail.

“The start-up of the train service will take place in several steps so that the manageability and safety of the train process can be guaranteed. We still have to contend with disruptions in the infrastructure that are hampering the smooth execution of the service”, concludes DB Cargo the Netherlands on Tuesday evening.

ProRail adds: “It is difficult to estimate how long it will be before rail freight transport is no longer affected by the extreme weather conditions of the past weekend.”